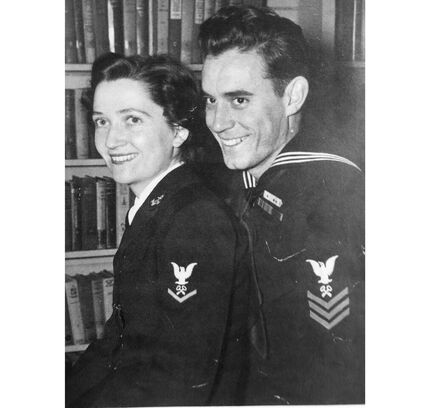 I knew Mary Watts because she was a student at Tehachapi High School and was a classmate of my sister, Evelyn Davis, both graduates of the Class of 1940. They were six years older than I so it was not until many years later that Mary and I actually became friends. The older one becomes, the more the age barriers are erased. I recall that Mary, during World War II, enlisted in the newly formed naval organization for women known as the WAVES (Women Accepted for Volunteer Emergency Service). She comes from an old Tehachapi family and to write about her, one could fill many volumes. I had read, in the latest Fence Post Newspaper edition, a story, written by Mary, that needs sharing again. The remainder of this article is from the writings of the late Mary Watts Farrell/Haubrich, who takes us back to when she was but a "slip of a girl."

One day, in the late 1920s, my dad, Tehachapi Butcher Al Watts, brought interesting news to the dinner table. He would be going to Finley Buhn's barn, located at the east end of the Tehachapi Airport, to help him with a mare that was bloated. My Dad asked if I wanted to go along; I said I did and my mother had a fit. We finished the meal and away we went!

Finley apparently didn't know the mare was in foal but when my Dad started working on her they both discovered a very small colt, alive and kicking. The mare died and Finley wrapped a gunny sack around the newborn colt and told me I could have her if she lived. We went home with a squirming animal in the front seat of the truck.

My mother never seemed to be bothered by such events so she merely asked me what I was going to name the tiny little horse. They put the baby colt in the chicken house to see if it lived through the night. I told her the horse would be named, Bessie and then I was also put to bed and upon awakening was delighted to find she had survived the night.

Bessie did not die! She was not shy nor afraid of noises as there was just a wire fence between the chicken coop (her first home) and the local dump yard. Since she lived in the chicken yard, I think she thought she was a chicken! She always came running at feeding time for the chickens, as we called, "Here, chick, chick, chick!" Even when out in the field, that was her signal to come.

My Dad asked my brother, Allen, and I to lead Bessie through the dump yard with its noisy cans and other trash, with papers flying in the wind, across to the train tracks with steam engines blowing their loud whistles. She didn't know that one day she was going to become a saddle horse. She thought she was a chicken.

Time passed and Bessie didn't mind being ridden but she was still a young horse when my parents decided to move from the property to town. I remember my father saying that Bessie was a good horse with beautiful markings and would make a fine horse for "the Law" as she was not gun shy. She was also parade material because crowds and noises did not bother her.

The last part of this story starts with a memory of my Dad telling us that a friend of his, Cas Walser, (Caswell Walser, Kern County Sheriff from 1923 to 1935) was going to come to our place and try out Bessie. He thought she would be a good horse for riding in Bakersfield. Bessie was down in the meadow with the other horses when the horse trailer came into sight.

We called to her: "Here Chick, chick, chick!" She came running, was loaded into the trailer and away she went! Bessie, the horse who thought she was a chicken. May her story live on.

(With Memorial Day just a few days away, I thought it fitting that I include a picture of Mary and her husband, Dick Farrell - both veterans of Uncle Sam's U.S. Navy, World War II.)