Terry Edwards, the warrior of the century 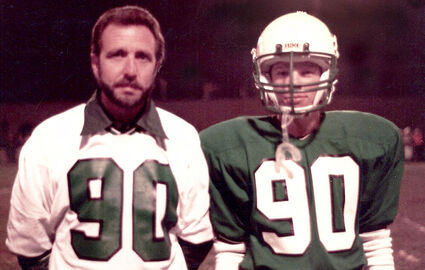 Terry and Brian Edwards on Dad's Night at halftime of a Warriors' game.

With Homecoming this past week at Tehachapi High, it's a good time to remember lifelong Tehachapi resident Terry Edwards, who earned the title "Warrior of the Century" and the "Ultimate Warrior" after he achieved a milestone that will likely never be equaled by anyone else: he attended 413 Warrior football games in a row without missing a single one for more than 30 years, from 1980 until he passed away at the age of 80 in 2014.

Terry's incredible streak of Warrior fandom began with a game against the Bishop Broncos on Halloween of 1980. He then proceeded to attend every game faithfully, both home and away. On two separate occasions when he was visiting his daughter Rocki, in Seattle, he drove home to Tehachapi, watched a game against arch rival Garces, and then drove back up to Washington again. He also attended basketball games and was probably the only non-parent to regularly attend away baseball games. As a devoted (and boisterous!) fan, Terry was simply in a class by himself – no one even comes close to his perfect attendance streak.

Terry was born in Monolith in a converted boxcar on May 18, 1934, and grew up in Monolith and later Tehachapi when he and his family moved into town. Terry played baseball and basketball at THS and graduated in 1952. He had the good fortune to marry a great Tehachapi girl, Terisa King, in 1959 and she stood by his side for more than 50 years. During his hospitalization and struggle with Paget's disease and later cancer, it was Terisa who Terry credited with his survival. "My wife Terisa is the reason I'm alive today," Terry told me emphatically in 2012. "She's a cross between Florence Nightingale and Joe Arpaio: she gives me love when I need it, and kicks my butt when I need it too." 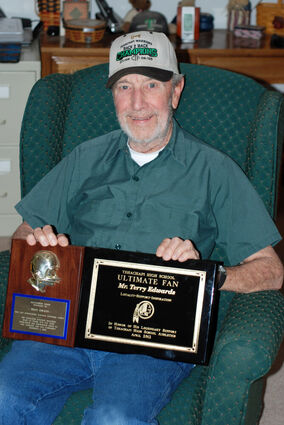 Terry Edwards with a plaque and hat he was given for his years of unbroken attendance at Warrior games.

Terry was a fixture at Warrior games, and you always knew he was there -- he didn't just sit there quietly, he shouted and cheered and hollered throughout the whole game. He and Terisa went to games together for decades, then in later years Terry went with his longtime friend Ed Grimes, the "Voice of the Warriors" who is the longtime THS announcer. When Terry's perfect attendance began, no one in the stands owned a cell phone, or had CD players in their cars, or had heard of a digital camera. The world changed much over the years, but there was one constant: every autumn Friday night, Terry Edwards was cheering on the Warriors.

Terry Edwards was recognized for his dedication to the Warriors, receiving a plaque when he reached 200 Warrior games without missing a single one, and a key to the City of Tehachapi when he made it to 300 games. Former Warriors like Marcos Curiel, George Hammond, Brett Oberg, Martin Rolin, Gary Cooper and others made sure that Terry was acknowledged for his incomparable support to THS athletics. After his viewing streak reached 400 games, he had M&M Sports make him a Warrior jacket with the words "400 Club" on the back -- an extremely exclusive club that is likely to remain a club of one. 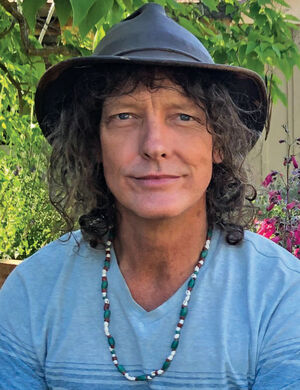