A port with no ocean 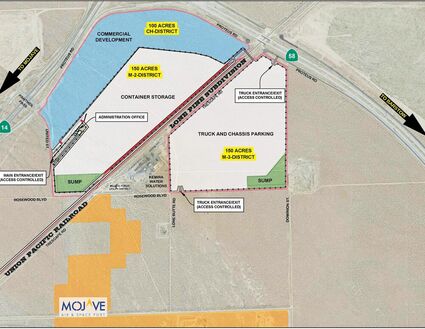 Map of projected layout of the Mojave Inland Port.

On Sept. 22, the Mojave Chamber of Commerce held a community meeting where Morgan Hill from Pioneer Partners fielded questions about the proposed Mojave Inland Port.

But first, what are inland ports and why would we build one? They are facilities that process the freight from a sea port away from the port itself.

We all know about the supply chain slowdown. When a ship offloads their containers, they need to be stored, sorted, and set out on trucks and trains to their final destination. However, with the rising cost of coastal land, it's becoming more difficult to offload containers quickly. That's where inland ports come in.

The proposed Mojave Inland Port property is 410 acres at the cross section of Highway 14 and Highway 58. The property borders the north end of the Mojave Air and Space Port and is bisected by a Union Pacific rail line that would be used to transport the freight from the Long Beach port, to the Mojave port. Pioneer Partners, believes that the location is ideal for any type of cargo being transported.

Community members at the Mojave Chamber of Commerce had many questions for Morgan Hill, such as: What sort of economic impact will the project have? How many people will you hire? Where do I submit my resume?

Pioneer Partners believes that the port will bring around a $500 million economic impact to the area with $226 million going just to wages. They have no hiring strategy yet, but if you are interested you can visit the Mojave Inland Port's website and sign up to be notified about updates to the project.

When asked when the project would be done, Hill responded that they were in the final drawing of a pricing phase. They expect to break ground next year and begin doing business in 2024. Hill followed this claim by saying, "When a developer puts out dates and numbers to be skeptical. Keep in mind that it's a moving target, so don't hold me to it."

There was also a concern for the traffic on Highway 58 Business on the north side of Mojave. The Union Pacific rail line runs through town and passes over the highway. The fear in many local's minds was the potential for more freight to block the highway and create traffic backups. This, we were told, will not happen as part of the project is to build a new overpass.

Once constructed, Pioneer Partners expects to offload one train a day but hopes to grow the amount to a dozen a day. It takes about 2 minutes to unload a container and 2 minutes to put one back onto a train, so they expect a car to take about 5 minutes to complete. Initially, the thought would be for the trucks to load up in Mojave and transport much of the product to the various warehouses in the Inland Empire, such as Amazon and Walmart. The Ikea distribution center south of Bakersfield would also be a likely destination from the inland port. But the goal is that with time, many of these warehouses may choose to build warehouses and distribution centers in Mojave, adjacent to the port.