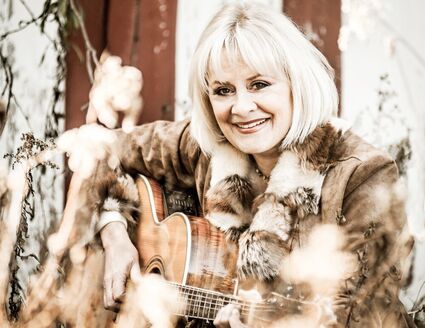 Claudia Nygaard is a mesmerizing storyteller and a cinematic lyricist who writes songs that are heartfelt, humorous, scrappy and sensual, and she does so with a daredevil's vulnerability and a complete lack of self-censorship. Nygaard, with her powerful, resonant and deeply emotive amber honey voice, is a master at putting a tear in your eye with a song that breaks your heart, and then with a quick wit and an outlandish sense of humor, she'll replace it with tears of laughter. Building on the craft she learned while a staff songwriter on Nashville's Music Row, she has won numerous awards including the prestigious Kerrville Folk Festival Songwriting Competition, and with the title cut of her latest album "Lucky Girl," the Tumbleweed Music Festival Songwriting Competition. "Lucky Girl" charted at No. 3 on the Folk Alliance Radio song chart and No. 5 on the album chart, and gave her a significant debut on the Americana chart. It also received impressive reviews from the press. Legendary folk music magazine "Sing Out" claimed the songs "rival the likes of Guy Clark or Ian Tyson."

See videos of Claudia Nygaard and learn more about her at: http://www.claudianygaard.com.

To request an invitation to this concert, visit http://www.fiddlerscrossing.com and use the "Contact Us" form in the "House Concerts 2022" section. Specify how many in your party. Invitations will be sent by email on a first come-first served basis until the available seats are filled. The location of the house concert, including a map and phone number, will be included in the invitation. No one without an invitation will be admitted. Attendees will be asked to show their invitations, either from their phones or in printed form. The required donation for the concerts is $25, in cash at the door. All these donations will go to the artists. A separate donation jar for the house will be available. As with all previous Fiddlers Crossing events, refreshments will be included. Doors will open at 6:30 p.m.