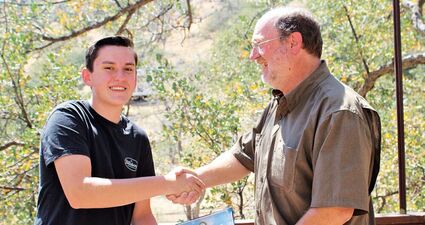 In the early months of 2022 Liam Alsbury, a ninth grader in Steve Hansen's English class at Tehachapi High, won a first place prize in a local competition with the American Legion Auxiliary Americanism Essay Contest.

A few weeks later, he also placed first in the district competition. School was out before the Auxliliary was notified, during their State Convention, that he had indeed become a State Winner for his essay, "What is the Cost of Freedom?" The provocative subject was handled in a knowledgeable and sensitive manner and thus, was winning material.

A slight problem arose when time came to award Liam his prize. As it turns out he and his family had moved and it took a bit of work by his former teacher, Mr. Hansen, to locate him in San Luis Obispo, California. The cash prize was presented and Liam and his family are getting settled in their new home.

Liam is the son of Michelle Seling and the late Michael Alsbury.