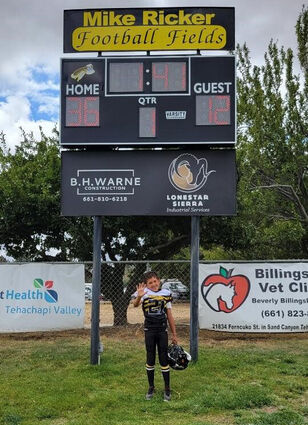 Stylz Davis in front of the scoreboard.

On Saturday, Sept. 10, the Freshman Tehachapi Tomahawks won their first game of the season against Central.

Both teams played a great game with the Tomahawks coming up with the win, with a final score of 36-12. This victory was hugely in part due to our son, #21 Stylz Davis. Stylz is 8 years old and is a second-year player for the Tomahawks. Stylz plays as a Running back on Offence and Defensive End on Defense. Stylz loves football and he is an amazing player. Even knowing how good he is, we were not ready for what he had in store for this season opener. I cannot speak for the rest of the fans, but we were amazed as we saw him flying down the field for his first touchdown, then another and another. In his first game as a running back, Stylz made five touchdowns. No words can relay the amount of pride we have for this amazing kid. We love you Stlyz and we are so proud of you.