The mysteries of water 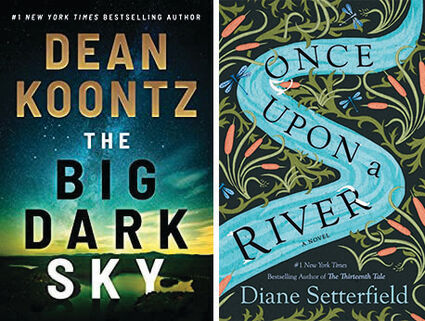 For this review I have chosen two books that revolve around water, one a lake and one a river. In some respects they are very alike. Both contain mysteries. Both reflect life and death. In both the water holds secrets. The secrets draw groups of people into working together. The stories are both terrifying and tender. That is what they share on the surface. Yet, there are also so many differences.

The first book, “The Big Dark Sky,” written by Dean Koontz takes the reader on a ride where advanced technology can find you anywhere, letting you know there is no place to hide, and the one searching is anything but benevolent. The entity can call you on any phone or computer, radio and TV screen, whether they are turned on or not. It can take control of your car, if it is equipped with a computer, and drive it where you do not want to go, including into a tree or over a cliff. Needless to say, these intrusions make the various characters in the story feel quite helpless when they have great need to be strong and self assured.

Joanna Chase is a writer. As a girl growing up on Rustling Willows Ranch in Montana, she faced tragedy at a young age, losing both her parents within a week. She was sent to be cared for by an aunt in New Mexico and quickly her childhood memories disappeared as if they never existed. When as an adult her dreams, phone and TV start bringing her messages filled with cries for help, Joanna reaches deep to find who this voice from her past could be. And she is drawn back to her family home.

The new owner of Rustling Willows Ranch and his family have a disruptive visit there and he calls in his detective to investigate several strange occurrences. The detective Wyatt Ride, unsettled staying at the ranch, encounters disturbing signs both in nature and in technology leading him to believe things are not what they seem. He calls upon his tech guy to investigate sources but he keeps to himself the mysterious illumination he has encountered in the lake. The tech guy along with a new friend are swept up into the story as they run for their lives. A madman holds two live captives above the basement of his first decaying victims. He wants to end the world. A young deformed and mentally challenged boy grown to manhood plays a victim. These descriptions only graze the surface of the story as it unfolds, leading the reader to turn the pages faster and faster.

In “Once Upon a River,” by Diane Setterfeld, the reader is drawn into a slower, simpler 1870s world along the River Thames. The countryside is dotted with small villages, each with its own pub and each pub with its own specialized entertainment, from music and dancing to gambling. At the Swan Inn in Buscot, entertainment comes in the form of storytelling. The clientele create the making of stories into an art form and would like nothing better than to have something new happen. On the night of Winter Solstice something dark occurs. An injured man holding a life-size doll in his arms stumbles through the door. They lay the man down to repair his wounds while determining the doll is actually a child, and she is dead.

While story after story is created as to what might have brought on this tragedy, the man is stitched up and the dead child starts to breathe. When the man awakens, they find out the child was found by him but is not his at all. Working to find her parents, they discover there are three little girls missing. The families are drawn to the Swan Inn and become parts of the many stories brewing. A couple whose daughter was kidnapped two years earlier, a husband of a woman who committed suicide after being seen with her daughter at a bridge over the river. A family with a wayward son whose heart is corrupt, a spinster who yearns for a child and a photographer who did not know he wanted one. These characters all converge and merge into various stories while the thread of a mystical figure, named Quietly, roams the waters of the river in a boat, to rescue some and take the others to their death.

Both books have a fair number of characters. All the characters are drawn to work together against the evils surrounding them, whether they know each other or not. All yearn for safety from the unknown, and finally, it all comes down to the water. Water is life giving and life taking. Water can hide what doesn’t want to be seen. Is it a monster? Is it an alien? Is it spiritual? Does it matter? When facing the most terrifying moments of life, it is the fight to live that matters most, the tight balance between a horrible or hopeful outcome. It is a wonderful gift, this fight to live. Because, as mentioned in the books several times, “something is about to happen” happens all the time. It is part of life’s story, and we are the characters within.