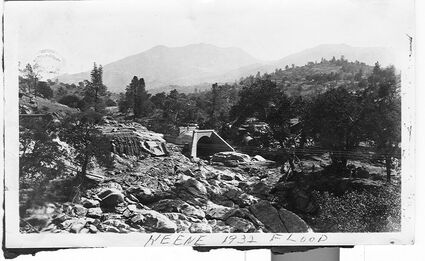 (I wrote an account of the 1932 flood over 30 years ago for the Tehachapi News. I was lucky to find someone who had been in Keene when the waters washed away people, houses and even buried a Santa Fe Engine, as well as washed a Southern Pacific engine off the tracks . I carefully kept notes after talking to Walter Hicks, who was in Keene during the whole thing. I have not added anything to enhance the story; only the facts told me at that time, by Walter Hicks, Laura Ramos, Bob Freeman, Bud Cummings and Dorothy Banducci Perry.)

Beginning in the mid-morning of Sept. 30, 1932, many inches of rain fell for 12 hours in the Tehachapi-Keene area. It was defined as a cloudburst. It had been a wet year and there had been a lot of rain ahead of this storm. Written information differs greatly as to the inches of rain that fell that day. Most say four or more inches. I am not specifying except to say it rained a lot and the precipitation for that year neared 17 inches. Some of the water spread south toward the desert but most was concentrated around Tehachapi and Woodford. Woodford is the railroad term for the Keene area.

By mid-afternoon concerned citizens watched heavy orchard boxes, full of pears, floating down Curry St. toward Main St. (Tehachapi Blvd.) and on to the Keene area. Many local Tehachapi homes also had water damage. Trees, rocks, earth and debris raced down Tehachapi Creek and through Keene and Caliente toward Arvin. At the south end of Keene above the Southern Pacific Depot and railroad employee houses, the water rounded a bend in the canyon striking full force against the bank and began eating into it. On the tracks sat two trains, each on a separate siding. Santa Fe freight train #3834 was on Siding No. 3, closest to the approaching waters. Both trains had stopped to wait out the heavy rainstorm.

About 7 p.m. that evening, Southern Pacific Signal Maintenance Foreman, Auzie O. Hicks, Sr., and his eldest son, Walter, observed from the cab of the Santa Fe locomotive, the rapid erosion occurring beneath the tracks on which the engine sat. They had taken shelter from the rain within the engine. The Santa Fe engineer and fireman, it was assumed, had already hastened to higher grounds. As Auzie and his son felt the locomotive sway slightly, they jumped to safety just minutes before the engine toppled onto its side into a deep ravine below, which before had been solid ground. The torrents of debris-filled water soon covered the engine.

Approximately three-quarters of a mile below the site where the engine had disappeared into the floodwater, an enormous blockage of the debris was accumulating behind a large railroad culvert, shutting off the water flow through the culvert itself. This action was causing a body of water to build up behind the bridge-like obstruction. The condition prevailed for about 30 minutes until the waters gained sufficient depth to surge over the top of the culvert bridge and directly over the top of Southern Pacific freight train #5036 sided on Track No. One.

A short distance away, a service station, auto court and restaurant operated by Peter and Louise Kaad, had approximately 30 people within the café seeking shelter from the storm. Some were customers and many were transients; victims of the depression, who had been "riding the rails" (riding in the box cars unbeknown to the railroad brakemen).

Nick Tom, a Section Foreman from Rowen, a group of railroad section houses farther down from Keene, had been in the area that day checking the tracks for any possible damage from the heavy rain. Aware of the impending danger from the rising waters and the debris creating the temporary dam, he stopped by the café to tell the customers to get to higher ground immediately. Kaad, the proprietor, assured everyone that they would be safer in the cafe rather than out on the mountain in the rain. Tom left, but returned again to warn them once more. Kaad refused to leave, nor would he allow his wife and teenage son, Peter, Jr.,to depart. Reassured, all occupants in the restaurant also remained. Nick Tom, himself, because of his heroic efforts, barely escaped as the powerful flood waters burst the debris dam and swept away the gas station cabins and the café.

About 10 p.m., as the waters began to subside somewhat, the Southern Pacific engineer, came down from the hillside where he had taken refuge. His S.P. engine #5036 had managed, somehow, to remain upright and on its track, though derailed, when the flood passed over it.

He and a group of men with various borrowed lights, looked for his fireman. They found him, alive, with his arms encircling the smokestack atop the engine. He was in such a state of shock that his arms had to be pried loose by his rescuers. Only moments after he was removed to safety, the locomotive slid off the tracks coming to rest with the rear tanker cars on their sides and the entire engine becoming submerged in the waters for a time.

About midnight, the rain stopped. As soon as they were able, Auzie and Walter Hicks made their way farther down the hill to see how the people at the café had fared. What had once been known as Kaad's Camp was splintered remnants of lumber and portions of foundations.

Mrs. Kaad's body was found in Bena Flat, near Arvin, some three weeks later. That of her husband was located below Keene on a creek bank near the tuberculosis sanitarium, Stony Brook Retreat. Their son was found near the service station entangled in the branches of a tree. During the ensuing months the bodies of many transients would be found strewn between Keene and Arvin but never identified.

A 40-foot cliff remained where the Santa Fe locomotive #3834 had stood on Siding # 3. Below, at the foot of the cliff was a wide, flat sandy area with no sign of the engine or even any railroad tracks. Railroad workers were certain that a 225 ton engine could not go far. For nearly a month #3834 remained on the missing list. Workers poked large rods down into the earth with no results and searched far downstream. Finally, an electro-magnet was obtained from Bakersfield High School and the engine was found under less than 10 feet of mud in the area where it had first fallen. The problem of reclaiming it was yet to come.

Part two will be in a future issue of The Loop newspaper.