Series: Air and Space Port - then and now | Story 2

Several small businesses were already established at Mojave Airport, but the major lessee was the General Electric Engine Test facility. They had recently moved from Edwards Air Force Base to Mojave Airport and they employed 100 people.

One of GE's first engine flight test programs in 1971 at Mojave was a North American Sabreliner fitted with GE engines that provided 200 pounds more thrust than the original engines. Later they used a Boeing 707 and then a Boeing 747 that tested the GE-90-115 engine that was used on the Boeing 777.

Flight Systems Inc. (FSI) was founded at Newport Beach, California in 1968 by Bob Laidlaw, an MIT graduate with an advanced degree in Aeronautical Engineering. In acquired the assets of Long Beach-based Flight Test Research, among these being a Canadair Sabre 6 (N186F) and four Canadair T-33 Silver Stars. These aircraft went to equip FSI's new flight test operation in Mojave, California. The flightline was full of FSI's F-86s, T-33s, F-100s, some A-4 Skyhawks and later F-4s.

FSI's primary business was to assist in the development of surface-to-air missiles for the U.S. Army. The Stinger missile and the Patriot missile systems are two of the more successful projects Bob's company participated in.

An initial FSI drone proposal was submitted to the U.S. Army Targets Branch at Huntsville in December 1973, and a "proof of concept" contract was signed a year later. Concurrent with the agreement, Laidlaw was able to secure a purchase option on approximately 55 of Dave McEwen's ex-RCAF Canadair Sabre Mk5 airframes.

FSI took a different tack: the company thought that if the drone conversion could be kept simple, and the drone was never flown without a safety pilot except for actual missile firings, then the probability of losing an aircraft due to system failure would be very low. As a result, the QF-86E conversion could be relatively simple and would thus minimize cost. Minimum disruption of the aircraft systems also ensured that the conversion process was quick and easy.

In the 1970s, the new Canadair Challenger business jet on the drawing board was a risky proposition. Derived from a design by American inventor and aircraft developer Bill Lear, Canadair Chief Designer Harry Halton married a wide-body fuselage with a high performance supercritical wing and state-of-the-art engines. With banks and the then federal Minister of Industry, Trade and Commerce Jean Chretien requiring 50 "firm orders," a Canadair sales team was dispatched to sell a "paper aircraft with only sales brochures, scale models and a wooden mockup to go on."

The innovative Challenger design boasted industry-leading performance. It promised to be faster, cheaper to fly and more comfortable than any other business jet.

With orders of 56 aircraft from North America, Europe and the Middle East, Canadair's top management, headed by Frederick Kearns, gave a "go" to the Challenger project.

Guess where they wanted to do all of the flight test work to gain certification for worldwide operation? The first prototype was flown to Mojave Airport and Dan Sabovich saw to it that a hangar was especially constructed for them. It is still known as the Canadair hangar, just east of the Administration Building.

The National Test Pilot School, located at the east end of Mojave Air & Space Port, was established in 1981 and is the only civilian test-pilot school in the United States. It is organized as a not for profit, educational institute under California state law and is governed by a board of trustees.

NTPS is one of the seven test-pilot schools worldwide recognized by the international Society of Experimental Test Pilots, giving pilot graduates of NTPS instant initial acceptance into their society.

In 2016, NTPS became the first test-pilot school in the world to be certified as a Flight Test Authorized Training Organization by the European Aviation Safety Organization.

Burt and Dick Rutan – So many airplanes and so many records!

Burt Rutan, without a doubt is the most prolific aircraft designer in the world! I have to mention some of his first designs (too many to picture) for the Rutan Aircraft Factory, including: Variviggen; VariEze; Defiant; Quickie; Long-EZ; and Solitaire. Rutan went into design overdrive after he formed Scaled Composites!

The Rutan Aircraft Factory operated from 1974 to 1985 selling airplane plans developed by Burt and supporting home builders. During those 11 years, Burt developed a total of 12 different aircraft, the most notable of which is the Long-EZ.

This year Scaled Composites will observe their 40th anniversary of designing, building and testing composite aircraft.

The success of Scaled Composites owes itself to Burt's philosophy that the best ideas come from the collaborative efforts of small, closely-knit project teams and an environment unlimited by adversity to risk. Although Burt officially retired from Scaled in 2011, his legacy continues in Mojave.

In August 2007, Northrop Grumman completed a transaction that increased its ownership in Scaled Composites, LLC from approximately 40% to 100%.

Voyager made the extraordinary first-ever non-stop, unrefueled flight, around the world with pilots Dick Rutan and Jeana Yeager (no relation to Chuck Yeager). 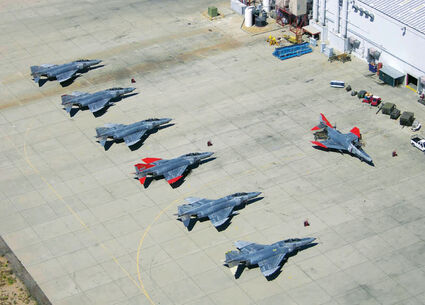 Thousands of people witnessed the landing of Voyager on Dec. 23, 1986 on the dry lake bed at Edwards AFB. The Voyager story is one of great emotion, courage, vision and adventure and is often referred to as "aviation's last first."

On August 29, 1983, less than a year after the founding of Scaled Composites, Burt's brother, Dick Rutan, piloted the Starship prototype.  Beech Management flew in to Mojave from Wichita, Kansas to witness the first flight of the airplane they hoped would replace their King Air.

Part three will tell about the growth that took place in the 1990s and will be in a future issue of The Loop newspaper. 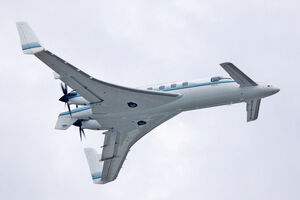