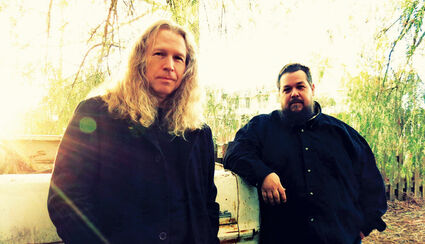 Fiddlers Crossing, the downtown acoustic music venue, now known as Fiddlers Crossing Concerts, will present the third in a series of four outdoor "House Concerts" on Saturday, Sept. 10 at 7 p.m.

The concert will feature singer-songwriter duo, Berkley Hart. The two played the Fiddlers Crossing venue a number of times over the last decade and have always been an audience favorite.

Storytelling in music is as old as melody. Although today's pop music tends to focus more on "beats" than ballads, musical storytelling is still alive and well in acoustic music.

Berkley Hart is certainly in the top tier of musical storytellers. The combination of Kerrville New Folk Songwriter Award winner, Jeff Berkley, and stand-out wordsmith, Calman Hart, creates a pairing that has become one of the premier acoustic duos touring the country.

Each song they present is a little slice of contemporary life, like a little movie. It's storytelling at its best and most succinct, whether told from the point of view of the family dog, or a single father consoling his heartbroken daughter after a disastrous prom date. The ups and downs of life are explored in their many albums, with the piercing twists of observation in their lyrics accompanied by stunning harmonies and virtuosic guitar playing. Their live show is laced with comedy and their obvious camaraderie.

Hailing from San Diego, both Berkley and Hart emerged from the Southern California coffeehouse circuit, each building sizeable followings of their own before joining forces. As a duo for more than 12 years, they have become fixtures on the folk circuit, making appearances at the Kerrville Folk Festival, as well as playing some of folk's most prestigious venues.

See a sample video at http://www.fiddlerscrossing.com/ or visit the band's website at: http://www.berkleyhart.com/.

To request an invitation to this, or any of the other house concerts in the Summer series, visit http://www.fiddlerscrossing.com and use the "Contact Us" form in the "House Concerts 2022" section. Specify how many in your party. Invitations will be sent by email on a first come-first served basis until the available seats are filled. The location of the house concert, including a map and phone number, will be included in the invitation. No one without an invitation will be admitted. Attendees will be asked to show their invitations, either from their phones or in printed form.

The required donation for the concerts is $25, in cash, at the door. All these donations will go to the artists. A separate donation jar for the house will be available. As with all previous Fiddlers Crossing events, refreshments will be included. Doors will open at 6:30 p.m.