Series: Air and Space Port - then and now | Story 1 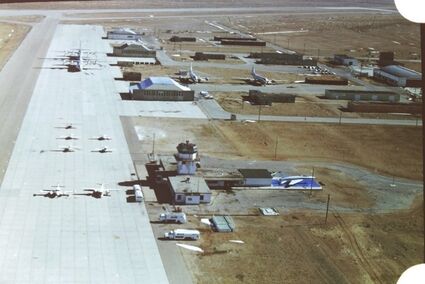 Mojave Air & Space Port District at Rutan Field is celebrating 50 years of success this year. This airport was built in 1935 by Kern County to help the local gold mine transport the gold ore to Sacramento for processing. It began as a small dirt strip, until 1942 when General William J. Fox, USMC selected the field as a Marine Corps Air Station.

It became a major training facility for the Marines who flew Chance-Vought F4U Corsairs during World War II. The Marines moved to Yuma in 1959.

The original Marine Corps tower and adjacent building is still standing, as are two of the original five hangars and the swimming pool building, which now serves as an event center.

After the Marines vacated the airport, ownership reverted back to Kern County.

This year, the Mojave Air & Space Port Airport District is celebrating 50 years of civilian experimental flight test, as the airport district was formed in 1972 with the passion and fortitude of Dan Sabovich, this airport's first general manager.

Sabovich was a rancher from Wheeler Ridge who loved airplanes and flying. He owned a J-3 Cub and would fly over to Mojave on occasion and envision what it could be. He had many aviation friends who were test pilots at Edwards AFB. Names that are familiar to us today because of their accomplishments that have made history; names like Chuck Yeager, Bud Anderson, Tony LeVier, Herman 'Fish' Salmon, Bill Dana, Scott Crossfield, Fitz Fulton and Joe Engle.

Sabovich knew the location of Mojave Airport was significant, because of the airspace above being adjacent to the Edwards Air Force Base restricted air space, and it was close to airspace at China Lake Naval Air Weapons base in Ridgecrest. His dream was to create a civilian flight test center, much like the military had at Edwards.

In 1969, when Sabovich learned that the county intended to lease the airport, he formed a corporation and submitted a bid. His corporation's proposal was rejected because a company that was developing California City, northeast of Mojave, had submitted a lower bid.

California City executives asked Sabovich to help make all of the arrangements between the Federal Aviation Agency (FAA) and Kern County to transfer the title of the airport to California City and he accepted the sizeable task.

Supporters of Mojave Airport recognized the potential of Sabovich's vision and efforts got underway to put the airport on the map.

Kern County asked Sabovich to remain as acting airport manager. There were 20 tenants in leased buildings and around 70 people employed at the airport.

Sabovich was friends with Congressman Barry Goldwater, Jr. who suggested that an airport district could be formed. They flew to Santa Maria Airport, as it was one of three airport districts in the state at the time and the knowledge he gained at that meeting helped him begin designing a plan to form an airport district here. It was decided to use the same boundaries as the Mojave Unified School District, thereby eliminating any additional monies needed for a legal description.

After campaigning the idea to the voters of the proposed district, it was placed on the ballot during a special election. The result was a landslide victory in favor of the airport district designation, and the district's first year's budget in 1972 was derived from a $120,000 loan obtained by Sabovich from a local bank.

This man did more than just convert a former military base into a storage lot for airliners, as some like to claim, he created an atmosphere where people like Burt Rutan could come with new aircraft designs, flight test them and build with innovation new aerospace techniques and procedures.

Sabovich let Clay Lacy, Darryl Greenamyer, 'Fish' Salmon and others hold national air races at Mojave beginning in 1969. They were exciting and stirred interest in this airport. 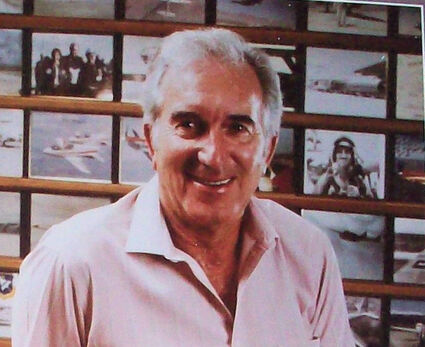 Sabovich served the district for over 30 years, retiring in 2002. He passed away on Feb. 17, 2005. The following is a quote from his obituary that appeared in the Bakersfield Californian, "Dan's most treasured possession was the friendship of others. Dan was born in Reedley on June 26, 1925 to Zorka and John Sabovich. Dan, as a member of the dwindling 'greatest generation,' served in combat in World War II on the Philippine island of Luzon as a squad leader of Filipino guerrillas. He was awarded numerous citations, including the Purple Heart."

The present success of Mojave Air & Space Port is envious and the future is extremely positive. The foresight and determination of Sabovich and the people who supported him started this amazing, history-making, incubator of aerospace dreams and civilian experimental flight test.

Part two will tell about the growth that took place in the 1970s and will be in a future issue of The Loop newspaper.