A different slice of life 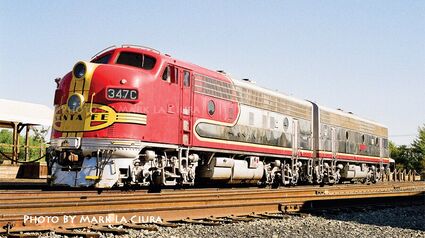 Santa Fe's 347C with a B unit, F-7 EMD class diesel, in the famous "Warbonnet" paint scheme. The F-7s are very popular with rail fans. These can be seen at the California State Railroad Museum in Sacramento.

I want to look back on a memorable trip to the Sacramento Railroad Museum with my daughter Sarah. This trek was more than 20 years ago and we saw many historic locomotives that powered through Tehachapi in the 1940s, 50s and 60s. Some of these locomotives were first generation diesels that were called the covered wagons (because of their appearance) or "F-7 Units."

These diesels were made by EMD (Electro-Motive Division of General Motors) and could develop 1,500 horsepower and were capable of speeds of up 95 mph. Both Santa Fe and Southern Pacific railroads operated these F-T, F-3 and F-7 locomotives in the days after steam locomotives were slowly being replaced. Santa Fe had trackage rights over the Tehachapi grade. Burlington Northern and the Santa Fe still have those trackage rights today.

I love watching old 16 mm film footage of this time frame when dieselisation was developing, but the steam locomotives were still used in some locations. I call these movies "train travel logs" that show us a slice of life that is very different than our world today. One video is called "Historic Hot Spots, Rail Fanning in Southern California." Lots of the film footage shows Tehachapi and the Loop on rail fan trips in the 1950s. In one part of the video the train stops on the Tehachapi Loop and over 400 rail fans get out of the train to check out the diesel and steam engines operating on the Loop. At one point these rail fans are climbing up on a Southern Pacific cab forward steamer as Southern Pacific F-7 units are working up the grade to the summit. This is a great video for rail fans and anyone who likes trains.

One of the important advantages of diesels is that they did not need water stops for freight trains. The use of dynamic brakes in the new F-7 units was added a great level of safety. Early diesel passenger trains did stop for water used on the train cars.

The F-7 units could pull grade and save time with no water stops. The new diesels did not need to be lubricated like the steamers with their big heavy drive rods which needed lots of attention.

Something notable about the F-7 units operated by Santa Fe was that they had striking paint jobs. The paint job was called the Warbonnet. Today we still see this historic paint on present day locomotives passing by our historic Southern Pacific rail road station daily.

"Warbonnet" is a rail fan term. Back in the 1950s Santa Fe employees normally referred to these locomotives by the less romantic and more descriptive term "red nose." Santa Fe's Super Chief, an all stainless steel streamliner running between Chicago and Los Angeles, was America's most famous and finest train.

These days, locomotives make 4,000 to 5,000 horsepower and still use dynamic braking. On the very heavy trains you can see three to four units on the front two units mid train and two on the rear of the train.

Many rail fans come to Tehachapi just to view and photograph trains with this heritage paint scheme we still seen on BNSF trains.

I see so many kids and families watching trains here in Tehachapi on our cool summer evenings. It's a fun pastime and you may end up seeing one of these heritage paint schemes.