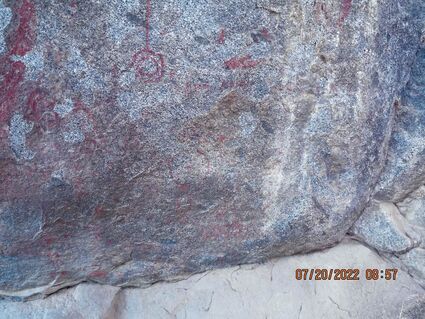 Little can be seen with the naked eye of the rock art in this portion of the panel.

A small group of interested locals hiked to a canyon on Bear Mountain recently to visit a rock art site whose location had been lost in the fog of time. Among the hikers was Fred Fickert, 75, who first discovered the artwork almost 60 years ago, when he was a 16-year-old on horseback gathering cattle on his family's ranch, which later became Bear Valley Springs.

Back in 1966, all of Bear Valley and most of Bear Mountain were owned by the Fickert clan. The family first moved to Bear Valley in 1866, when Fred's ancestor, also named Fred Fickert, bought the first 160-acre parcel in the area. Eventually the family owned nearly 24,000 acres of land where they ran cattle and dry-farmed grain.

On that spring day in 1966, young Fred was still in the saddle, picking his way down a steep canyon looking for strays when he happened upon the boulder outcropping with prehistoric symbols painted on them. Later that year, Fred showed them to an archeologist, but apparently the location wasn't recorded. A few years later, the family sold the sprawling ranch to Dart Industries and it became the Bear Valley Springs subdivision.

Attempts to relocate the rock art site in the following decades were unsuccessful. This isn't surprising -- there are a number of steep canyons on Bear Mountain, and hundreds of rock outcroppings.

The main efforts to find the lost site came from Jack Sprague, an area resident who is an archeologist specializing in rock art. Jack has spent countless hours and days over the past 30 years looking for, finding and documenting rock art sites. He has added coordinates and descriptions of nearly 100 sites to a data base maintained at Cal State University Bakersfield.

Jack, Fred and an avid local hiker named Tom McMullen, who lives in Bear Valley Springs, searched for the location of Fred's long ago discovery back in 2019, when Fred and his wife Ann visited from their home in Lockeford, California. Fred was here to give a presentation about what life was like back in the Fickert Ranch days, and to visit the Errea House, where a room has been dedicated to Fickert family history in the Tehachapi Mountains.

Despite a lot of strenuous hiking, the group wasn't able to find the boulder with the painted symbols. But this summer, Jack and Tom teamed up with Stacy Arebalo, a senior police officer with the Bear Valley Springs Police Department, and BVS ranger Rocco Spinelli to search again.

The group went up and down canyon after canyon, dealing with steep slopes, high temperatures and tall weeds before they finally relocated the giant boulder with art. Fred was delighted to be able to revisit the site when he was here on July 20, completing a personal goal to see it again in his lifetime.

The rock art was probably done by people from the Kitanemuk tribe, who were also in the Tehachapi Mountains, but not as prominently as the Nuwä (Kawaiisu or Southern Paiute). It is not known exactly when the symbols were first applied, but the working estimation is sometime between 300 and 1,000 years ago.

The red lines of the art have faded in the hundreds of years since they were painted on stone. However, there is a means of seeing symbols that may now be difficult or impossible to spot with the naked eye. Called decorrelation stretch, or DStretch, the method was first developed by NASA to improve Mars Rover images.

A rock art researcher named Dr. Jon Harman then adapted this space technology to help enhance photographs of prehistoric art in a completely non-intrusive way. Some early rock art researchers would trace around painted symbols with chalk or pencil, actually applying chalk to the stone surface, in a misguided effort to help outline fainter design elements. The practice is no longer done for obvious reasons, and is illegal. It is clear that no direct contact should be made of ancient rock art.

But DStretch does an amazing job of enhancing even faint or invisible lines through the use of processing software. The resulting colors are fake, in a sense, since they are not what a viewer sees, and the hues differ from what the Native artist applied, but they are an accurate depiction of what is genuinely on the rock surface and DStretch is a great enhancement tool.

So what do the symbols mean? That's always the ultimately unanswerable question in rock art studies, since the original creators of them are long deceased. Sometimes rock art appears to be fairly straightforward depictions of animals, like bighorn sheep, but when it comes to geometric designs and seemingly abstract patterns, we can make educated guesses and rational suggestions, but there is no way of knowing for certain.

For now, the exact location of the Fred Fickert's rock art find, and another one discovered by the team in their search this summer, are being kept confidential for the protection of the sites. Guided hikes may one day be a possibility.

The big boulder sits unobtrusively in an oak-dappled canyon, bearing the faint traces of an earlier culture that painted symbolic markings on its vertical surface in centuries past. . . 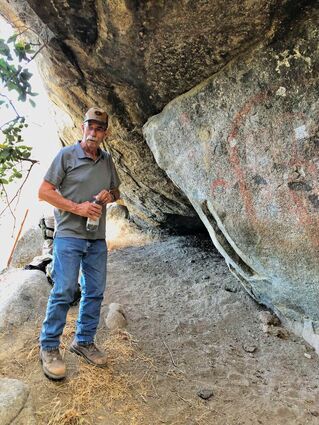 Fred Fickert at a rock art site on Bear Mountain that he first discovered while on horseback in 1966.