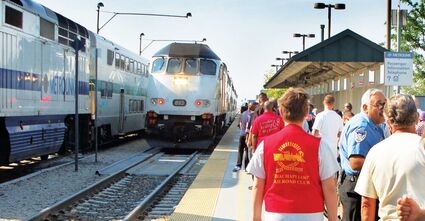 Getting ready to board the Metrolink in Lancaster.

If you're looking for an interesting day excursion from Tehachapi, I suggest you consider taking the Metrolink train from Lancaster into Downtown Los Angeles and back. I've done this before, and it makes a fun and memorable trip.

I first took this trip back in 2013 with members of two different Tehachapi train organizations: the Tehachapi Loop Railroad Club and the Friends of the Tehachapi Depot. We toured the vintage Union Station, as well as visited to Grand Central Market – the city's largest and oldest public market – and took the trip up the Angels Flight funicular, which is often billed as the "world's shortest railroad."

A trip like this begins on Saturday or Sunday morning by driving down to the Lancaster Metrolink Station on Sierra Highway. You can buy your weekend passes from ticket machine kiosks located next to the tracks. And what is the price for a weekend pass of unlimited travel on the Metrolink system? Just $10! And kids 17 and under ride for free.

This pass allows a rider to ride anytime, anywhere system-wide from 7 p.m. on Friday through 11:59 p.m. on Sunday, and offers free connectivity to most rail or bus lines throughout Southern California. After arriving in Union Station, for example, you can take a Red Line subway to Pershing Square and back free of charge because of having the Metrolink Weekend Pass.

A good Metrolink train to take leaves heading south towards LA about 9 a.m., and it's best to sit in the upper deck for a better view. Because the Metrolink is largely a commuter line, it doesn't have some of the amenities of longer distance trains, like a bar car or refreshments for sale. However, passengers can bring along their own food or drinks (alcohol not permitted) and some cars have tables for food, laptops or games for kids.

The seats are comfortable and overall the train cars seem a little more spacious than a typical commercial airplane. The train makes very brief stops – five minutes or less – at a number of Metrolink stations as it heads toward Los Angeles. The train provides interesting views that you can't see from the nearby Highway 14, which it roughly parallels for much of the trip.

If you leave about 9 a.m., the train should arrive into Union Station at about 11:30 a.m., and you should look around a bit and become acquainted with Union Station. Considered to be "The Last of the Great Railway Stations" to be built in the U.S., it opened in 1939 and was known as the Los Angeles Union Passenger Terminal.

It was designed by father and son architects John and Donald B. Parkinson, who also designed LA's City Hall and other landmark buildings. And there's a Tehachapi connection: Donald Parkinson was also the architect for the Courtland Gross Stone House in Brite Valley, which is on the National Register of Historic Places and was one of only four private residences that Parkinson ever designed.

The Los Angeles Conservancy offers regularly scheduled tours of Union Station each month, and special group tours like the one I took with the railroad clubs can be arranged as well. The Conservancy also offers a variety of other walking tours of Downtown LA, check out their website for more info.

After checking out Union Station, you can board the Red Line subway for a very brief ride to Pershing Square, where you can exit and walk a block to the Grand Central Market, which offers a diversity of prepared meals as well as fresh fruits, vegetables, meats, poultry and fish from California and around the world. The Grand Central Market has been a hub of bustling activity since 1917 and still is today. You can buy a meal from some of the many different vendors in the food court and eat it there, or better yet, walk across the street to ride Angeles Flight up to the California Plaza.

The Angeles Flight is a funicular, or cable railway, that takes passengers up to the top of Bunker Hill and back. It's only about 300 feet long, but it is up a steep incline that would be a daunting walk for many people. Angeles Flight first opened in 1901, and was dismantled and put into storage from 1969 until 1996 when it was reopened.

You can ride Angeles Flight up to California Plaza, which is a gorgeously designed public space with water features, planters full of blooming flowers and outdoor eating space. There are also outdoor concerts and performances held there on a regular basis. Angels Flight operates from 6:45 a.m. to 10 p.m., seven days a week, 365 days a year, including holidays.

After lunch, you can the Red Line back to Union Station and walk across the street from Union Station and explored the historic Mexico-like vending stalls of Olvera Street. When I went with the railroad clubs we returned to Union Station to board the 5:40 p.m. train back to Lancaster, and made it to the Metrolink Station at Sierra Highway shortly before 8 p.m. 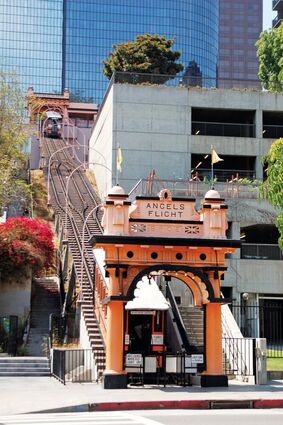 It makes for a long but very interesting, exploratory day. And it's a great deal for families, since only adults have to pay for a ticket, and it's only ten bucks. Tehachapi has such an important railroad history, but since we can't currently ride a passenger train through Tehachapi, it is fun to ride the closest train to us.