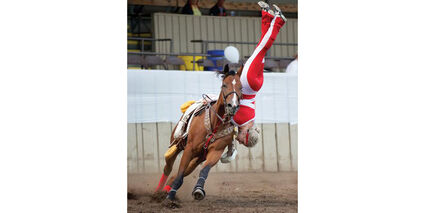 Trick riders at work are a sight to behold. Watching them swing around, perform handstands and dangle inches from the ground, all from the back of galloping horse, is a rush. For those of us who work hard just to stay upright in the saddle, watching riders hang upside down at top speed is mind-blowing.

"You Earn your reputation in the arena, but you earn your respect in the barn."

My story begins in the much the same way as every little girl who grew up with a passion for horses: my love and desire to ride at the famed Riata Ranch was more than passion... it was an addiction. I was enamored not only with all the horses, but the young women who became my mentors showing me the ins-and-outs of ranch life, horsemanship, team work and leadership training. I was very shy and insecure, so this kind of foundation built around horses and a Western lifestyle was intoxicating to me.

I learned to ride, and in a short time made the Riata Ranch Special Classes, which meant I could buy my first horse and compete at shows specializing in reined cow-horse competition. However, Riata Ranch International founder Tommy Maier, decided to start a western performance team to compliment his award-winning horse show team. In between training days for the show team, I was also learning to trick ride along with my team mates. Before we knew it, Janna Copley, PeeWee Moreno, Laurie McWilliams and I were trading in our western saddles for trick riding saddles and we began a journey like no other as the first professional Riata Ranch Cowboy Girls trick riding team, traveling all over the western United States. It was a wonderful time and we started with some of the most notable names in the business: Jack Roddy, Bob Cook, Lex Connelly, Edith Happy Connelly, Montie Montana and J. W. Stoker. But it was Cotton Rosser and the Flying U Rodeo where we cut our rodeo teeth! I'm Flying U Rodeo raised!

We had the opportunity to perform at some of the most noted rodeos, meeting some of the biggest names that the world of rodeo has produced. For me, a young girl from the suburbs, this was heaven! Soon, we began international travel building western riding in Europe in the early 1980s. It was an exciting time to be on the forefront of the explosion of the Western Horse in Europe and abroad. With Tom Maier's flair for showmanship, we spent more time in Belgium, Germany, France, Italy and Switzerland than we did in our own country sharing our talents, Western lifestyle and building respect for our western riding sports. It was a wonderful time meeting people from all around the globe who loved all the aspects of our Western lifestyles as we do.

Besides appearing at rodeos across the country, I have been a part of many opening and half time shows for the NFL, including Monday Night Football Games, Play Off Championships, Super Bowls and the American Bowl in Barcelona, Spain. We also have participated in NBA events as well as professional baseball. I have been with the Riata team appearing in 22 countries on five continents representing the Western American lifestyle in the rodeo arena and professional sporting arena turf. One of my highlights was being chosen to appear with Reba McIntire, in her "I'm Gonna Take That Mountain" video, trick roping along with my teammate Kansas Carradine and famed trick roper and one of our mentors, Gene Mclaughlin. This passion that I have turned into a way of life that has been rewarding and has taken me places I could have never dreamed of going.

One of the most prestigious events occurred at Windsor Castle in England where the Riata team performed for Queen Elizabeth at her Diamond Jubilee Pageant, a celebration of her coronation 60 years ago. Besides performing for her majesty, I actually got to meet her and talk about Riata Ranch. What a thrill to meet one of the most well-known world leaders in our modern era, and it's all because I learned how to spin a trick rope and wear a cowboy hat!

In 2002, Riata's founder passed away and we were faced with the question: "do we shut the doors or do we continue?" The obstacle was that the company was bankrupt due to Tom's years of major medical issues. A bit reluctantly, I took the reins and decided to forge forward. With a lot of uncertainty, grit and determination, here we are. The company has been rebuilt, we have a new home base, added new offerings and instead of Riata Ranch going to the world, the world now comes to Riata Ranch in Three Rivers, California, where we're constantly connecting people to the ranching and rodeo lifestyles.

It's a labor of love that I feel is more important than ever to educate about: teaching people from all around the world about livestock, how our food is produced and our Western lifestyle.

Come to Benz Bad Bull and see our team of trick riders.