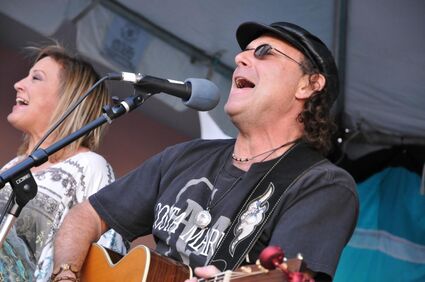 Fiddlers Crossing, the downtown acoustic music venue, now known as Fiddlers Crossing Concerts, will present a series of four outdoor "House Concerts" between July and October this year. The original venue space is now the home of Calliope Music Studios, who recently celebrated their grand opening.

The first concert in the series will take place on Saturday, July 9, at 7 p.m. and will feature "Acoustic Folk-Rock balladeers" JC & Laney. The duo played to a sold-out crowd at the venue in 2016 and presented on online concert for the Fiddlers Crossing audience in 2020.

The logo for the JC & Laney reads, "Heart 'n' Soul & Rock 'n' Roll." That's the perfect summary for this dynamic musical duo. They are high-energy entertainers, with improvised banter, signature harmonies and memorable songs that run the gamut between folk, blues, pop, rock and comedy. Together they write, sing harmony and perform their own compositions, with two voices and one guitar.

JC Scott, from Long Island, New York, cut his musical teeth in front of crowds during the Classic Rock Era, playing guitar and singing with such musicians as Arlo Guthrie, Lindsay Buckingham, Kenny Loggins, Chuck Berry and Weird Al Yancovic. Before meeting Laney in 2009, he had already written and recorded five solo CDs.

Laney Greynolds has been using her powerhouse of a voice to sing traditional country, gospel and rock music since she could breathe. She has recorded with many artists in her career, as well as being the lead singer and driving force of the classic rock band Saddletramp.

Together, JC & Laney have performed at house concerts, state fairs, festivals and venues, including Fiddlers Crossing. The emotional delivery of their original style of acoustic folk-rock-Americana music will leave you feeling you have found some new best friends!

To request an invitation to this, or any of the other house concerts in the Summer series, visit http://www.fiddlerscrossing.com and use the "Contact Us" form in the "House Concerts 2022" section. Specify how many in your party. Invitations will be sent by email on a first come-first served basis until the available seats are filled. The location of the house concert, including a map and phone number, will be included in the invitation. No one without an invitation will be admitted. Attendees will be asked to show their invitations, either from their phones or in printed form. The required donation for the concerts is $25, in cash at the door. All these donations will go to the artists. A separate donation jar for the house will be available. As with all previous Fiddlers Crossing events, refreshments will be included. Doors will open at 6:30 p.m.