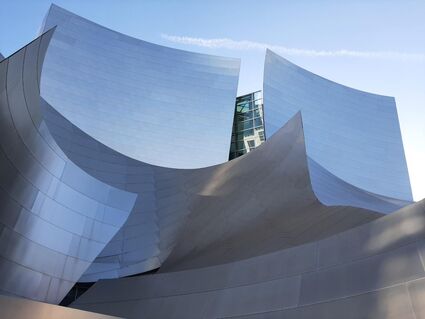 The distinctive stainless steel sculptures atop the Disney Concert Hall are visible from blocks away.

Every now and then an opportunity arises for me to get out of the comfort zone of our little mountain town and its slower pace and get into the faster pace and sometimes chaotic scene that is Los Angeles.

Such was the case a couple of Sundays ago when friend Suzanne Bennet and I headed south. Our destination was the Walt Disney Concert Hall in downtown L.A. for an evening lecture by Angela Davis.

We left mid-afternoon to allow plenty of time for travel and dinner before the main event; amazingly traffic was easy the entire way and we made good time. Finding the music hall was our only challenge (thank goodness for GPS) but we got there after only three trips around the block to find parking.

The parking we found was a block away from the music hall, under the restaurant where we ate dinner (at the Au Lak LA, which features plant-based menu items; if that doesn't suit you, there is a Subway right next door; the area is home to several entertainment venues and eateries). Once we made the walk to the music hall we discovered a restaurant at the hall too, next to the gift shop, so choices are abundant (it's always a good idea to make reservations, which Suzanne had thought to do for us at Au Lak).

When it was time to go inside for our event, we had to show vaccination records and IDs, and we were required to wear masks. When we proved worthy to enter, we were given a paper bracelet showing we had followed protocol. And once we entered the hall we were in for a real treat.

The Walt Disney Concert Hall opened in 2003 and is home to the Los Angeles Philharmonic. Designed by architect Frank Gehry, it is internationally recognized as an architectural landmark and one of the most acoustically sophisticated concert halls in the world. In my own plain layman's terms: it is quite jaw-droppingly beautiful and awe-inspiring.

The outside of the 3.6-acre complex is all modern stainless steel and curves and angles (we spotted those unique towering steel curves before we found the right address from street level). Inside the auditorium, however, it's warm and welcoming, comfortable and accessible, and it features the most beautiful and functional 6,134-pipe organ that towers above the rear of the stage. We didn't get to hear the organ during this visit as we were there for a special event and not a concert, but I think it would be worth a trip back there in the near future just to hear it.

Note: refreshments are available in the outer hallways of the building, but no food or drink is allowed in the concert hall itself.

All in all, Suzanne and I agreed this was a great day (and evening) trip, although the lecture was a little bit of a disappointment. But just seeing and being in the music hall was a treat in and of itself. And I'm happy to say, the trip to LA and back was neither too fast paced nor too chaotic (although we did stop to help at the scene of an accident on the 14 coming home).

If you go to the Walt Disney Concert Hall, I can't give you explicit directions but I can give you an address: 111 South Grand Avenue. We found it easily enough using Suzanne's Siri but it was a rather circuitous route due to road construction and closures. Parking, including accessible parking, is available for $9-10 under the complex; enter on Second Street or Lower Grand Avenue. Valet Parking is also available for a fee at the Hope Street entrance. 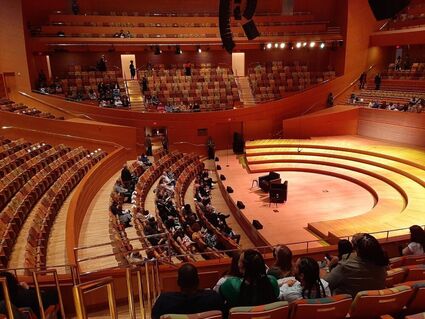 The Disney Concert Hall seats 2,265 people, most in stadium seating, and thanks to the acoustics of the hall, there are no bad seats.

Or better yet, go Metro – I'd like to try that next time myself, especially these days with gas prices so high (on this trip, thank goodness for Suzanne's hybrid). Catch the metro in Lancaster, take the Red or Purple Line directly to Civic Center/Grand Park Station and the hall is a short block west on 1st Street (from 1st and Hill Street).

For more information about the venue or upcoming events or the Philharmonic season, you can visit http://www.metro.net or call (323) 466-3876.

However or whenever you may decide to go – whether to a concert or a lecture or some other special engagement – I don't think you'll be disappointed in the Walt Disney Concert Hall experience itself.

© 2022 Mel White/Mel Makaw. Mel is a local writer and photographer and avid day-tripper; she welcomes your comments, questions and suggestions at morningland@msn.com.