Summer is almost here, and rattlesnakes are back 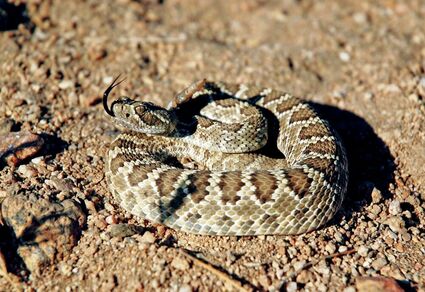 A Northern Mojave Rattlesnake, often referred to as a "Mojave Green."

Now that summer is upon us, snakes are once again stirring in the Tehachapi Mountains, as warmer temperatures have awakened them from their wintertime slumber.

I have seen a Coachwhip, several California Kingsnakes and a Great Basin Gophersnake. The rattlesnakes too have become active, even though it has been a fairly cool spring.

How active? Well, the Snake Guys, a group from Bear Valley Springs that was started more than 15 years ago by Ron Hayton, have already removed 59 Northern Pacific Rattlesnakes this year as The Loop goes to press. By the time you read this, they've probably moved at least a couple more.

The Snake Guys (and a gal or two) are a team of six or seven volunteers who take turns responding to requests from people who encounter a rattlesnake around their home, but would prefer not to. So one or two of the Snake Guys show up, safely remove the serpent, and release it unharmed far from people.

Last year, the Snake Guys relocated about 250 rattlesnakes to reduce conflicts between people and the reptiles. They also moved about 200 non-venomous snakes from around the homes of people who weren't comfortable sharing their surroundings with snakes of any species, size or description.

During peak reptile season, calls come in fast to the Snake Guys – they have received as many as 10 service calls in a single day.

As someone who values and cherishes snakes, I am very appreciative of the Snake Guys and their efforts. The community is lucky to have the service that they provide. If you want their help with the removal of a snake, call or text Ron Hayton at 661 203-4468.

Most people have the good sense to use caution and not get too close to rattlesnakes, but some pets are not as sensible, and every year in the Tehachapi Mountains some dogs and cats (and occasionally horses or other livestock) get bitten by rattlesnakes.

This can be very dangerous for a smaller mammal, and while most will survive, each year some local pets die from snakebite. If you live in one of the outlying areas and have a dog that explores outside, you might want to have your dog vaccinated in advance. A rattlesnake vaccine developed by Red Rocks Biologics was first licensed California in July, 2003 and was approved nationwide by the USDA in 2004.

The vaccine must be given in advance, before a bite, of course, and can not only save the life of a dog, but also greatly reduce the amount of suffering, pain and tissue damage that they experience as a result of being bitten. The vaccine can also save money on your vet bill in the event of a bite. Tehachapi veterinarians offer the vaccine to pet owners who wish to inoculate their dog.

The Tehachapi Mountains are primarily home to one species of rattlesnake: the Northern Pacific rattlesnake (Crotalus oreganus oreganus). This snake typically has a basic "ground color" that matches their surroundings, and may be light brown, tan, olive-green, reddish, gray or golden. Over this basic background color, they have saddle blotches or dark patches running the length of their body. These blotches tend to be very dark right at the margins, then have light borders around them. Their tails are banded with alternating light and dark bands, with the dark bands typically wider than the light bands.

Now, within this basic appearance, there are tremendous variations. Northern Pacifics can be very pale, very dark, reddish, greenish, intensely patterned, lightly patterned, etc. If you looked at photos of some different individual specimens, you would be skeptical that they were from the same species at all. And yet they are.

Residents of Cameron Canyon have reported Northern Mohave rattlesnakes on their property and wind energy employees occasionally encounter them at turbine sites on the eastern hills, but otherwise there is no evidence of any other rattlesnakes in the Tehachapi Mountains but Northern Pacifics.

Rattlesnakes spend the colder months in a refuge known as a hibernaculum, which is Latin for "tent for winter quarters." Usually this is in a crevasse or cavity in a boulder pile, though rattlesnakes may also use a fallen tree trunk or abandoned animal burrow – rattlesnakes are poor diggers and don't excavate their own holes. Which is why I always smile when I hear someone refer to a random gopher or ground squirrel burrow as a "snake hole," as though a rattlesnake made it.

The period of cold weather dormancy among snakes, lizards and tortoises is called brumation, from the Latin word bruma, meaning midwinter or winter solstice. While it is common to hear people talk about snakes hibernating, technically only mammals, which of course are warm-blooded, enter into hibernation.

I did this, but I DO NOT recommend it. This Northern Pacific rattler was intent on escaping into an old ground squirrel hole, and disappeared as soon as I let go of its tail.

The re-emergence of snakes is no reason to panic, but there is also good cause to be careful – we do have rattlesnakes, and their venom is dangerous to humans and pets.