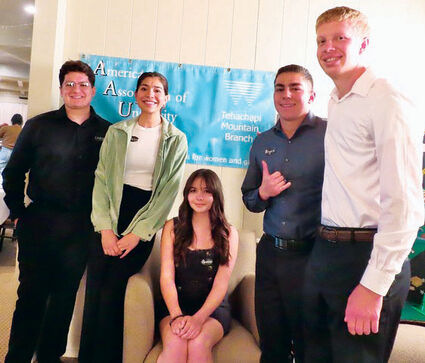 Seven exceptional students were recognized for their achievement and rewarded with scholarships from American Association of University Women. The awards were distributed at a celebratory dinner, recently hosted by AAUW Tehachapi Mountain Branch.

Jacob Safford received a $3,000 scholarship given in memory of Janice Hagen-Armstrong who worked tirelessly on the scholarship committee until her death six months ago. Reese Sherman, Daisy Andrade and Bryce Rodriguez each received $3,000. Christopher Strickhouser-Monzon was awarded $500 for the Eddith Mae Hinkle Memorial Scholarship.

Each one was introduced by an AAUW member who explained why the student was chosen. There was a common characteristic among them. They all had top grades and studied diligently to maintain them. They set goals for themselves and worked hard to achieve them. They participated in a wide-range of activities from sports to volunteering. They care about others and are anxious to help where needed.

After receiving their award, each student spoke to the audience about their dreams and plans for the future. They thanked AAUW for the money, but more importantly, they thanked their parents for the love, support and inspiration received throughout their life.

Middle School Awards were presented to John Lambert and Jaskiran Grewal. They had been recommended by their teachers for recognition because of their high achievement and excellent character. Each received $100 and a certificate. Mrs. Fontaine, who introduced them, suggested they might be back in four years to receive a high school scholarship.

AAUW Tehachapi Mountain Branch began a scholarship program in 1980. The amount given has increased over the years so the total amount given is now over $250,000. Funds for an account called SFFW (Scholarship Fund for Women) accepts tax deductible donations. The AAUW branch is currently sponsoring a fundraiser through a play at The BeeKay Theatre called "On Golden Pond." It costs $25 and takes place Sunday, June 19, at 2 p.m. The BeeKay Theatre is located at 110 S Green Street in Downtown Tehachapi. Call (661) 858-4101 or (661) 821-2055 for tickets.