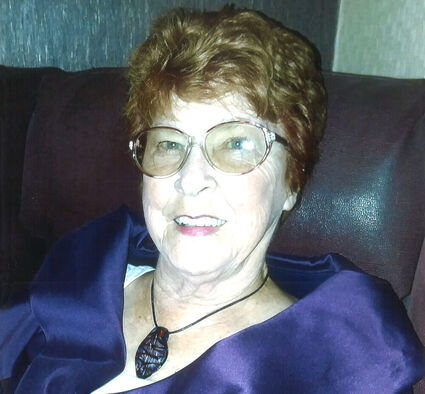 It is with great sadness that we share the passing of Bernice Henderson at the age of 80. Born to parents, Carl and Anna Winkler in Peoria, Illinois on Nov. 26, 1941, Bernice passed away peacefully on May 2 surrounded by loved ones.

Bernice enjoyed a long, rich life. During her lifetime she married three times. First to John Tincher, with whom she had five children: Terry Tincher, Christine Tincher, Tracy Tincher, Jackie Meyers and Julie Siragusa. Many years later Bernice married Vernon Stagner, and in her last chapter of life she was wed to Robert Henderson. She was proceeded in death by two spouses, her son, Tracy; son-in-law, Anthony Siragusa; granddaughter, Marie Siragusa; her parents, and her siblings. Bernice is survived by four of her children, her son-in-law, Doyle Meyers; daughter-in-law, Linda (Wolney) Tincher; several stepchildren, and numerous grandchildren and great grandchildren.

Bernice's most fond memories were of being raised on the farm in Shawano, Wisconsin, with her four siblings, John, Dorothy, Richard and Carl (Butch); and Michael Winkler, son of her oldest brother. She loved the large family gatherings that brought together her beloved cousins and nieces and nephews from the area and from Illinois. She was the fun Aunt who took everyone to the movies with loads of candy in her large pocketbook.

Growing up with much older siblings taking on the heavy chores, Bernice was free to run and play as much as she liked. She quickly grew from a cute little girl with long pigtails, to a lovely young lady, who had no shortage of suitors. But it was the boy down the road, just back from the Marines, who won her heart. Soon she became a young wife and mother as well as one of the hardest workers one could hope to find. She took on many odd jobs from serving fast food on roller skates, to being a nurse's aide. After her family moved to California in the late 1960s, Bernice secured a position with Safeway (later Vons) and worked with the company for 30 years.

In the 1980s, Bernice and John parted ways and she later met and married Vern. He won her over the first time she heard him sing. They were a great team and became a refuge for several of their respective grandchildren. Sadly, Vern's health failed, and he left too soon. Bernice was quite certain she would never marry again. But then came Bob. Against all odds, they soon became inseparable. And her third and final wedding was held in a lovely chapel filled with family and loved ones.

Bernice enjoyed this new chapter in her life. There were quiet drives, long talks, short walks and dinners out. Unfortunately, both were in their later years and suffered health issues. Bob passed quietly in December 2021. Battling years of cancer, heart issues and losing yet another loved one had taken its toll on Bernice. Family members gathered to say farewell both in person and through video chats.

Beloved mother, grandmother and great grandmother, Bernice will always live in our hearts.

Interment was at Union Cemetery in Bakersfield, California, following the memorial service, with a reception at The Woods Pavilion.

Flowers can be sent to Wood Family Funeral Service. In lieu of flowers, donations can be made to Tehachapi CANCER FOUNDATION.

Wood Family Funeral Service has been entrusted with her care. For condolences, please visit http://www.woodmortuary.net. The State of California encourages social distancing and wearing face masks/coverings is highly recommended.