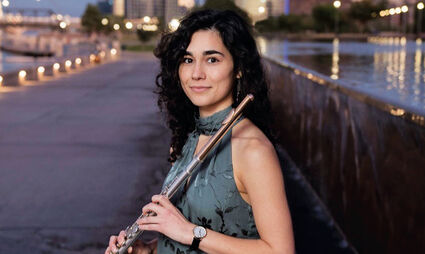 Deanna Buringrud is an American flutist, whose passion is to enhance the connection between musicians and their communities. In each of her performances, she strives to impart the essence of what each music collaboration means to her. She received her bachelor's degree in Flute Performance at Arizona State University, where she studied with Dr. Elizabeth Buck. Her primary teachers and influences include Dr. Elizabeth Buck and James Walker.

Deanna is experienced as a soloist, chamber musician, and orchestral musician. She has performed on several occasions with teacher and soloist James Walker, who is on the faculty of the Colburn School of Music in Los Angeles, California. In 2016, she performed with the Los Angeles Flute Guild at the National Flute Association convention in San Diego, California. In addition to performing in several of her own recitals, Deanna has performed at various local venues, such as at the NASH in Phoenix. Deanna has performed with and been a member of Arizona State University's Symphony Orchestra, Wind Ensemble, and Philharmonia. Within these ensembles, her favorite performances include the commission of John Mackey's "places we can no longer go" at the College Bands Directors National Association (CBDNA) Conference in February 2019, and Leonard Bernstein's "Mass," in December 2018.

John Knowles Paine's Overture to Shakespeare's As You Like It and Felix Mendelssohn's Symphony No. 4 in A Major will also be performed.

Following the concert, audience members may meet the Young Artist competition winner, as well as the symphony director and musicians.

Admission is always FREE to the community. For more concert information call (661) 821-7511 or go to the website: http://www.tehachapiorchestra.com.