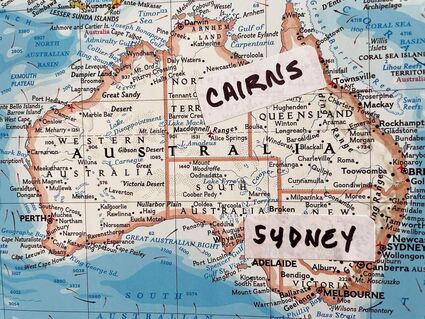 Years ago, in Australia, my late husband George and I experienced "no room at the inn" and lack of money.

We were helping with a college credit class of 22 students. We had already visited Fiji and New Zealand, carrying only what we could heft onto on our backs. Finally we reached Sydney and rented cheap rooms in Queen's Cross, at that time a red light district. What an eye-opener!

Our two leaders told us ahead of time that there was barely enough money to fly us to Cairns and back, near the Great Barrier Reef. No money for lodging or food. When we arrived in Cairns, we first stayed in a monastery where we were not allowed to talk because the regular residents were having a silent retreat! There were two sleeping rooms, one for the males and one for the females, and only one central bathroom, so we had male bathroom hour alternating with female hour.

One day we took a dive boat out to the Great Barrier Reef, incredibly beautiful with brilliant colors of coral. There was a huge barrel of scuba gear on the crowded boat, and the best equipment went to the students. George and I were last to get gear, and it was really damaged. George's oxygen tank slipped out of its holder and fell to the bottom of the sea. He dove down and got it! My buoyancy compensator refused to deflate so I could not go underwater, although I kept trying for about 20 minutes. By that time we had washed FAR from the dive boat via a huge ocean surge. I was VERY frightened and insisted on waving my arms, the signal for a rescue. George was quite upset with me and swam the long distance back. He kept telling me, "You can do it, Murtz! You are a strong swimmer!" But I was scared out of my wits. Luckily a student on the boat spotted me, and he rescued me right away, but I had terrible nightmares for weeks. George was not happy with me at all.

The two instructors of record had run out of money and ideas, and had completely given up. They kept saying, "We warned you!" And it was raining hard! George finally decided to take the bull by the horns. We were thankful when he found a filthy but empty Boy Scout camp high in the woods above Cairns. The sole caretaker was nasty and DIDN'T want us there, but George persevered. Bunks were five deep and covered with dirt and bugs. Huge spiders the size of tarantulas roamed the ceilings, some falling off, so no one wanted to sleep on the top bunks! Students went out each night, misbehaving in those dark hours, came back in and climbed into their bunks, snoring like trucks. It was really awful, a bit of a nightmare!

The caretaker bathed nude each day in his forest bathtub. At first he badly wanted us to leave. There was a large pond with a rope swing, and our students loved swinging out over the water and letting go. Splash! There was no class money left for food. The students pitched in and cleaned the bunks, helped during the day where they could, chipped in to buy cereal, milk, flour and eggs. One beautiful member cooked breakfast and dinner for all for 50 cents a day each. She even made handmade tortillas! That nasty caretaker amazingly grew to enjoy our presence. The night before we left he barbecued a delicious buffet dinner for us all. Wow!

The last morning, we all had to get to the Cairns airport many miles away. Only three of us had rented little mokes (tiny cars holding three at most). The two original instructors and their wives just drove themselves to the airport and left the rest of us at the camp! George drove 22 students to the airport, two at a time, for hours. Needless to say, we were not happy! But we did all make it on time, and arrived in Los Angeles after a very long flight with a Honolulu stopover. We all slept in the transit lounge on the floors, shocking the other passengers. We finally arrived at LAX safely but completely worn out!

Anne Marie Novinger is a fifth generation Californian and has contributed many stories to The Loop. She has lived in Tehachapi for 40 years and continues to be active in the community.