Saying goodbye to the First Lady of Mojave Airport

Mary Mildred (Jerri) Sabovich died in Savannah, Georgia on March 9, having reached 94 years of life on Feb. 28. She joins her husband Dan, and sons Danny and Mark that predeceased her and hopefully now has the company of their love.

This beautiful, talented and fiery redhead came from very humble beginnings, but always had high expectations and succeeded in becoming a respected and successful wife, mother, artist, community volunteer and a wonderful friend to many people.

Jerri was born 1928 in Bellefonte, Arkansas to Woodrow and Clarkie Jewel Jarvis where the family farmed 160 acres they owned. Like so many of that time, the Great Depression was a disruptive force for change and by 1936 there were no jobs or money; so the dream of California was a beacon of hope for a better life. The family sold all of their worldly possessions, including the cow that sold for $1. Because folks didn't have much money, their belongings only brought in pennies. With the meager funds in their pockets, her family headed west when she was 8 years old.

Driving to California with so little money, she said the family ate and slept beside the road each night, finally crossing through the Tehachapi Mountains and down into the valley to the town of Oildale.

Jerri's mother, Clarke Jewel, died Christmas Eve 1940 from cancer when Jerri was only 12. Later in life Jerri said, "There was no one to comfort me."

Son-in-law Randy Gaston wrote in Jerri's obituary, "Early life's struggles was the furnace that steeled her resolve to make herself more than destiny had planned. At an early age she realized a talent for drawing. Starting Union High School at age 13, she wanted to fit in but was self-conscious of her clothes and that the other kids came from good families that had money. She borrowed a neighbor's 50-year-old sewing machine and taught herself to sew." He said that Jerri told the story and said, "If I couldn't buy em, I could make em!"

Gaston added, "A friend, who expressed doubts about her acceptance, offered to introduce her for admittance to a girl's club at the school.

"I passed, I won them over and was allowed to join," Jerri remembered. They were her circle of friends until graduation and leaving for art school in Los Angeles.

Jerri was a fantastic, accomplished artist and painted some lovely pictures of wild horses and my favorite painting was of her husband, Dan, holding a saddle. Her artistic abilities shined when she made a scrapbook detailing the accomplishments of her husband and the Mojave Airport. She started the huge book in 1972, adding newspaper clippings and magazine articles about the airport and the last page was done in the year 2000. She donated the book to Mojave Airport and it was digitized and every page can be viewed on a large computer screen in the Administration Building of the Mojave Air & Space Port. So much history saved in one place for all to enjoy.

Jerri was working in a real estate office in Bakersfield when she first met Dan. I am sure it was love at first sight! On their first date, Dan took Jerri flying in his Piper J-3 Cub. Their courtship lasted two years and then they got married in Las Vegas in 1949, according to her daughter Debbi Gaston.

As a young mother, Jerri was active in community service, helping at the local school, and working on the farm in Arvin.

Randy Gaston wrote, "She enjoyed telling the story of selling melons on the side of Highway 99 which bordered their property."

Her husband knew many of the test pilots at Edwards Air Force Base and had a dream of turning the former Marine Corps Air Station at Mojave into a civilian flight test center. Dan became the first General Manger of the East Kern Airport District and served for 32 years. He had an association with the Society of Experimental Test Pilots since 1958. 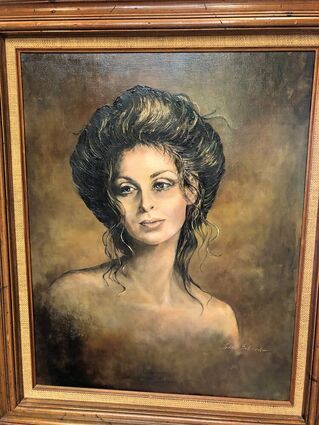 Jerri was always supportive of her husband and their friends were the most historic names in aviation and flight test. Jerri was warm and gracious and she enjoyed entertaining. Randy Gaston wrote, "She was an accomplished artist, made her own formal gowns, was a confident hostess and traveled the world. She was her own person. Towards life's end, she moved from Bear Valley, Tehachapi which she loved, to Savannah, Georgia to be close to family."

She leaves behind her daughter Debbi Gaston, son in-law-Randy Gaston, granddaughter Dacy Gaston Weiss, her husband, great grandson Asher; grandson Drew Gaston and wife Megan. A celebration of life will be held at a later date.

Many thanks to Debbi and Randy Gaston for sending me the memorial notice that they had published in the Bakersfield newspaper. We send our deepest sympathies and heartfelt prayers to them with the hope that the wonderful memories of Dan and Jerri will surround them always, and that God will cover them with His love and grace.