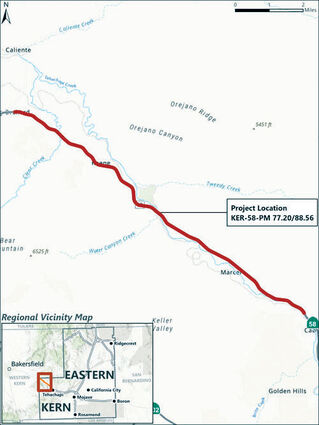 At the April 4 City Council meeting, Tehachapi City Manager Greg Garrett announced that an upcoming CalTrans project on Highway 58 is currently available for public comment, but will not be completed until 2025.

According to CalTrans, the project is currently in the design phase and includes 11.3 miles of Highway 58 to be located between Bealville Rd. and two miles west of the Highway 202 offramp. They will be upgrading existing pavement, guardrails, bridge rails, median barriers, drainage and lighting. Curves will be realigned in four locations. The plan could possibly include a wildlife crossing between Bealville Rd. and Hart Flat. Project maps are available to the public locally for comment at the Tehachapi branch of Kern County Library until April 28.

Garrett said this project has been in the "queue" for 20 years, remarking that CalTrans efficiency has been decreasing. This project does not even address the addition of truck climbing lanes. Mayor Phil Smith added that the Kern Council of Governments (KernCOG) has gifted CalTrans the funding of the Environmental Impact Report (EIR) for the climbing lanes project.

Smith said Tehachapi is at the end of both CalTrans District 6 (western Sierras) and District 9 (eastern Sierras) and any work to be done on Highway 58 east of the 202 will not happen before 2030. At about 45,000 trucks annually, Highway 58 is part of an interstate transport system and has the third highest number of trucks in the state of California, higher even than Interstate 80 out of Sacramento.

Anyone interested in this project should check out the maps and documents before April 28.