War in the Aleutians 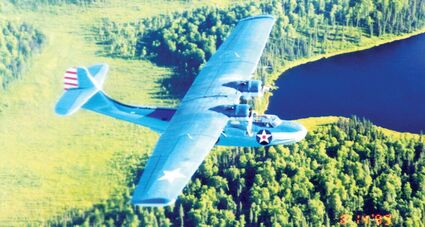 I remember attending a Navy League meeting in Bakersfield back in 2005 where I mentioned that my husband, Al, likes to watch a documentary video called, "Report from the Aleutians." The movie was directed and narrated by John Huston and it tells the story of the great battle fought at Dutch Harbor and on the islands of Adak and Kiska.

The weather conditions in the volcanic Aleutians were more of an enemy to the Army and Navy, than the Japanese. There is a constant low pressure around the Aleutian Islands and every weather condition can be experienced in a 24-hour period. Williwaws are sudden squalls that sweep down from the mountainous areas with gale force winds and present violent hazards to sea and air navigation.

After the meeting, Don Barnes, a longtime member of Bakersfield Council Navy League, came up and told Al that he was there aboard a PC Boat (Coastal Patrol Boat or Sub Chaser) during the Battle of Attu and he knew how cold and terrible the weather was.

We flew our PY5A to the Alaska Aviation Heritage Museum for a Salute to World War II veterans, Battle of Dutch Harbor and the Wings over Alaska project back in 1999.

In doing research for this article, I found this comment to describe the Aleutian weather best, "The lands of 50 mph fog!" Sounds like home, without the fog, doesn't it? However, we are blessed that we don't have all the other inclement weather conditions of hail, snow, sleet and bitter, wet coldness.

While we were in Alaska, we stopped to see the Memorial at Merrill Field. The memorial plaque read: Inscribed here are the names of those airmen from the Eleventh Air Force, Fleet Air Wing Four and Royal Canadian Air Force who died or suffered captivity in the defense of Alaska while serving in the Aleutian Islands during World War II.

I think it may surprise some people, but our nation was attacked twice during World War II by the Japanese. The second time was at Dutch Harbor in the Aleutian Islands on June 3-4, 1942, six months after the Pearl Harbor attack.

Do you remember the news coverage of Sept. 11, 2001, listing Pearl Harbor as the only other time America had been attacked on its own soil since 1812? Everyone seemed to forget that Alaska and Hawaii were both American territories during the attacks on Pearl Harbor in 1941 and Dutch Harbor in 1942. Alaska became a state Jan. 3, 1959, and Hawaii became a state later that same year, Aug. 21, 1959.

The assault on the Aleutians was simultaneous with the Japanese attack at Midway Island.

Consolidated PBY 5A flying boats of Fleet Patrol Wing Four were the mainstay aircraft used to locate enemy ships, and the Vought OS2U Kingfishers were catapulted off of U.S. Navy battleships and cruisers. The Eleventh Air Force brought in Curtiss P-40 Kittyhawks; North American B-25s; Consolidated B-24s; Boeing B-17 Flying Fortresses, Lockheed P-38 Lightnings and Bell P-39 Aircobras to launch raids on Attu and Kiska from the base at Adak.

There are several books available about the war in the Aleutians, including: "The Thousand Mile War," by Brian Garfield; "The Forgotten War," by Stan Cohen and "The Aleutian Warriors, A History of the 11th Air Force & Fleet Air Wing 4," by John Cloe.

An interesting note here about our "Russian allies:" There were 291 airmen interned by Russia when they were shot down while on bombing missions over the Kurile Islands and had to divert to landing strips in Russia.

One airman from a B-24 named "Bugs Bunny What's Up Doc" of the 404th Bombardment Squadron writes: "Siberia- shot down by Jap[anese] fighters over Kurile Isl. Two engines shot out, hydraulic system, radio and radar out. 75 20mm holes in wing and fuselage. Pilot and navigator wounded, pilot bad. Belly landed on beach in blinding snowstorm. Bomb bays fully loaded with bombs.

"Lived in plane for 13 days before Russians picked us up. Walked 55 miles to Army outpost, and then went by boat to an internment camp for 3 months, traveled across southern Siberia to second camp at Tashkent in Southern Russia. Stayed there till May 29, 1945. Returned to states June 1, 1945." Footnote: "Pilot doing fine as of August 24, 1981."

Remember these guys in the coldest conditions imaginable walking 55 miles to an internment camp, when you think it's cold here! And, oh by the way, the Russians were supposed to be our allies. We loaned them aircraft during WWII and they imprisoned our airmen! The Cold War will never be over for some U.S. Citizens. I am now praying that the Cold War won't suddenly turn hot.