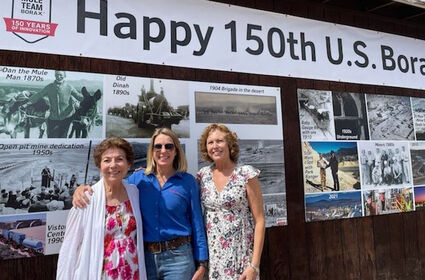 It was a great celebration that brought together many people that have contributed to Borax's 150 years past and present. People joined for a picnic lunch, 20 Mule Team Museum tours, and a light program with speakers from Rio Tinto, government officials and community members.

Ryan Harnden, the newly appointed Chief Operating Officer for California Operations, commented on the history and future of the company. "U.S. Borax has changed and evolved in the last 150 years, supporting societal developments in technology, construction, manufacturing and more. With such a rich history, U.S. Borax is proud to celebrate its sesquicentennial and carry our history of mining innovation into the 21st century."

The program celebrated the rich history of U.S. Borax.

In 1872, RM Smith discovered the "Borax Rush" and ultimately founded the origins of U.S. Borax. With original roots in Nevada, closely followed by operations in Death Valley, the 20 Mule Team made its way to Boron, where is has operated for nearly 100 years.

In parallel to Nevada mining, William T. Coleman set up a borates industrial site in Death Valley. Increasing debt caused Coleman's assets to be transferred to Smith, who in turn, formed the Pacific Coast Borax Company (the predecessor to U.S. Borax). Processing and transportation innovations in the early 1900s, modernized the operation

After World War I, Borates were discovered in Kern County spurring a new mining operation called "Boron" in 1927. The mine shifted from underground workings to open pit mining in 1957. The town and the mining operation grew and in 1967, Rio Tinto bought the business.

During the next five decades, new products were introduced into the market – expanding the use of borates from a cleansing additive to agriculture, fiberglass, ceramics, heat-resistant glass and more.