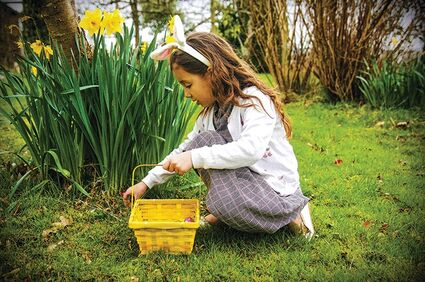 Just how was the Easter egg tradition hatched?

Since religious as well as secular imagery and traditions have melded to form the Easter most individuals recognize today, a mix of customs may be part of your Easter festivities. Among them will be colored eggs, egg hunts and possibly even egg rolls. Just how was the Easter egg tradition hatched?

Before Christianity was as widespread as it is in modern times, many societies associated eggs with spring and new life. Many birds and animals lay eggs early in spring, and these eggs tend to hatch upon the arrival of the warm weather, budding flowers and buzzing insects.

Ancient Persians are believed to have painted eggs for Nowrooz, their new year celebration that would fall on the spring equinox each year.

Eggs also have been part of Passover celebrations. A hard-boiled egg dipped in salt water is served at a Passover seder, symbolizing both new life away from oppression and the Passover sacrifice at the Temple in Jerusalem, according to Chabad.org.

In medieval times, eating eggs was forbidden during Lent, when both dairy and meat were avoided. To reduce waste, eggs laid during Lent were boiled or preserved in some way.

The fast ended on Easter Sunday, and eggs became, once again, important and nutritious staples - especially for poor families that couldn't afford much meat. Eggs also were given to the church by medieval English villagers and also to the lords of the manor. Royals eventually got in on the act, and decorated eggs were distributed to the household in a tradition that was one of the earliest to include eggs.

Some historians suggest that egg hunts can be traced back to German Protestant reformer Martin Luther, who organized egg hunts for his congregation. The men would hide the eggs for the women and children to find. This symbolized the story of Christ's resurrection, when the tomb was discovered by women. The eggs also represented Jesus' new life and his emergence from the tomb.

Egg hunts are not the only egg-related games that were hatched for Easter celebrations. According to the website Learn Religions, some European children go from house to house begging for Easter eggs, like children may ask for treats on Halloween. The custom is called "pace-egging," a term derived from the old word for Easter, "Pasch." Egg rolls also are symbolic of rolling away the stone from Christ's tomb. Various countries have their own rules on egg rolls. In Germany, for example, children roll their eggs down a track made from sticks.

Easter eggs are an integral symbol of the holiday that hold both secular and religious meaning.