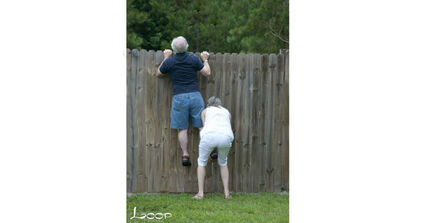 Coral and Chris Holland moved into their Tehachapi home on Dec. 21, 2021 just in time to host a whole family for Christmas. The couple came to California from Boston earlier in the year and settled in Silver Lakes which is in the middle of the desert. A few weeks of 108 degree weather was enough to convince them that they needed a slightly cooler climate. Tehachapi was perfect.

Coral is retired after spending 47 years in the management of elder care facilities. During that period, she was involved in the building of 21 senior centers. Her husband Chris is currently working as a healthcare consultant and, I understand, is also available to officiate at weddings. Among his many other talents, he is also an accomplished photographer.

Chris and Coral were both born on the East Coast; Coral in West Virginia and Chris in New Jersey. Coral has three children; a daughter in Reno, a son on Martha’s Vineyard who works as a tugboat captain and a daughter who works for the Commonwealth of Massachusetts. Chris also has a daughter and a son.

Keeping them company in their new home is Tilly, an Australian cattle dog rescued by the couple and a bunny rabbit named Lucy.

Soon after the Hollands moved into their new home, they discovered that their next door neighbor was also new to Tehachapi and it was not long before Carolyn Nelson and Coral Holland were good friends.

Carolyn moved to Tehachapi in November from Woodland Hills in the San Fernando Valley. Now retired, Carolyn decided to move closer to her parents who already live here. She said they moved to Tehachapi 30 years ago because they wanted space, something that appealed to Carolyn as well.

Carolyn was born in Burbank, California and has lived in Southern California most of her life. She has a daughter who is a photographer and a son attending Denver University.

Now that she lives in Tehachapi, Carolyn said that she might take up golf but foremost in her desires is to work with animals. “I have always been a sucker for animals,” said Carolyn. She said that someday she would love to have a sanctuary; however, in the meantime she has her dogs, cats, a bunny and a chinchilla to keep her company. After Carolyn mentioned she would love to have an animal sanctuary, she was excited to discover that Tehachapi has the Animal Education Center at Windswept Ranch with its camels, zebras and reindeer and is now considering joining their group of volunteers. Indeed, they would be lucky to have her.

It was delightful getting to meet these new neighbors. Welcome to Tehachapi Carolyn, Coral and Chris. Enjoy your new community.