Mason Hutchison was invited to speak at the March 19 Plane Crazy Saturday event held at Mojave Air & Space Port and sponsored by the Mojave Transportation Museum. He graduated from New Mexico Institute of Mining and Technology, and has worked in the aerospace industry for 16 years.

He started his engineering career at Ball Aerospace, working on the Airborne Laser program, focusing on material interaction of laser engagement. It was a lifelong interest in experimental aviation design that later drew him to Scaled Composites. It is there that he gained experience in design, build and testing of the SpaceShipTwo feather deployment system. Soon after, he completed the White Knight 2 landing gear design and release system and saw them through flight test.

From there, Hutchison led the Flight Controls design team on the Stratolaunch aircraft. Currently, Hutchison works for Stratolaunch as the lead engineer for the Release System for the Talon hypersonic unmanned system.

"I came on board to design the mechanical flight control system and I have been here ever since the first roll of carbon fiber fabric showed up to build the airplane, all the way through to today," Hutchison said. "I had actually quit Scaled Composites and moved to Minden, Nevada to find another dream, but something kept drawing me back to Mojave. There was a Plane Crazy event and my friends called and said, 'Come down and join us for Plane Crazy,' so, I drove all the way down, nine hours to Mojave from Minden."

When he arrived in Mojave, he discovered the real reason his friends wanted him to come to Mojave. His friends said, "Guess what? We need help designing and building the mechanical flight controls for this airplane, are you interested in helping?"

Hutchison replied, "I have never designed flight controls for an airplane, ever. I'm in!"

The room broke out into laughter.

"I led a team of engineers and we designed the entire cabling system from the cockpit all the way through the airplane," Hutchison explained. "There is almost a quarter of a mile of steel cable in this aircraft."

As he started to show photos of the incredibly huge Stratolaunch aircraft, he said, "I have been with this aircraft through all four flights, every taxi test and every test event in the hangar. There is so much testing that happens with this aircraft, aside from the flight tests."

Originally from New Mexico, Mason is a lifelong full-scale and radio control model aviation enthusiast. He is a founder and active member of the Tehachapi Crosswinds, a local Radio Control club. He was an active member of the team that organized the Indoor Fly-In in the Event Center here at Mojave Air & Space Port.

He showed a picture of a model airplane that he had built and he said, "I sent this picture to Scaled Composites as my resume. They get resumes with lots of words all the time. I wanted to show them something that they would remember," said Hutchison. "I always wanted to move to California and work at Scaled Composites. Matt Stinemetz hired me and Burt Rutan never looked at my resume or asked about my grade point average. He wanted to know what I had built. I had taken a portfolio of everything I had made and my resume was slid to the other side of the table and my portfolio was the only thing that was ever considered in getting that job."

He asked the question that he felt was on everyone's mind, "What is this and why did we build this insanely large airplane in one dimension and what is it going to be used for?" He answered with, "The story has changed somewhat over time, it has been 10 years since we laid the very first part."

First and foremost, what is it? He gave a simple answer: "It is a big, giant airplane that was meant to haul a payload. It flies far, it flies slow, it carries large stuff, it carries heavy stuff and it will drop that stuff."

First flight of Stratolaunch, Scaled Model 351, was on April 13, 2019 during Plane Crazy Saturday Mojave Experimental Fly-In. It is no longer part of Scaled Composites and is a stand-alone company.

Hutchison showed photos showing size comparisons with people on the wing under construction.

"We can't talk about Stratolaunch without talking about dimensions," said Hutchison. "It's big! 385-foot wingspan makes it 64 feet longer than the H-4 Hercules or Spruce Goose. The airplane is on paper designed to carry 550,000 pounds of payload," Hutchison explained. "You don't just go out and design something to carry that kind of payload and then fly it that heavy right off the bat. We have not flown that heavy as yet."

Mission length is two to eight hours, but Hutchison said that the pilots are not eager to do an eight-hour mission.

Hutchison pointed out that the straight flat wing is something that model airplane people are familiar with. However, the last 65 feet of the Stratolaunch wing has three-degrees of dihedral or polyhedral. "It has the look of the model gliders back in the day," Hutchison said.

"By wingspan, Stratolaunch or Roc, is the largest airplane in the world," said Hutchison. "But, by max gross take-off weight, it is number two. The AN-225 can lift more."

He was explaining other ways that Roc surpasses other aircraft. "The wing spar is the largest single piece every constructed of carbon fiber at 260 feet long," Hutchison shared. "Another record is it is vinyl wrapped, it's not painted. So, maybe more square yards of vinyl used for one airplane."

Getting back to the "why" of this gigantic airplane, Hutchison said, "Number one, we are into hypersonics and you're going to see it here in Mojave. There is a race for this country to enter into hypersonics."

"Stratolaunch's mission is to build this unmanned Talon A vehicle that will be launched out over the Pacific Ocean," Hutchison said. Talon A, it is a flexible, high-speed testbed built for hypersonic research, experiments, and enabling operational missions. The vehicle will be 8.5 meters long with a wingspan of 3.4 meters and a total mass of approximately 2.7 tons at launch. It will be dropped aloft by its mothership, Stratolaunch.

Hutchison showed the audience how a launch would be conducted by the Stratolaunch aircraft. "We would take off from Mojave with the Talon A attached, go way out over the Pacific Ocean and drop the Talon A. There is enough fuel to loiter about while the Talon A accomplishes its hypersonic mission with the customer's instruments onboard," Hutchison explained. "Now, here's the cool part, Talon A will have completed its mission, returned to Mojave and be in the hangar, by the time Stratolaunch comes back to land at Mojave."

During Hutchison's presentation he reiterated how impressed he was that the donor 747 aircraft parts and systems were able to be reused in the building of Stratolaunch. Not only the landing gear and engines, but the cockpit windows were placed into the two fuselages of Stratolaunch. Many other parts were harvested from the 747, as well, including the yokes, rudder pedals, control seat rails, cockpit cabin floors, and instrument panels.

Hutchison showed a drawing that illustrated the systems complexity of Stratolaunch. "There are four hydraulic systems, almost a quarter statute mile of control cable. Each engine has an air driven hydraulic pump, an engine driven hydraulic pump and an electric hydraulic driven pump, together making more than 200 total horsepower of hydraulic service to the flight controls, the landing gear, and the braking systems. Each engine provides electrical power that is pumped into two massive power buss systems that meet at the center wing." 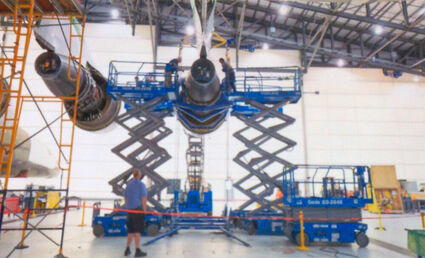 Hutchison showed photos of the giant aircraft just before the first flight, as it sat in the hangar that was especially built for it in 2011. The chase aircraft, a Cessna Citation is nestled under the wing of Roc.

There were many questions at during the presentation that Hutchison answered and people stayed to visit at the conclusion of the briefing. Some folks wanted to know why the airplane seems so quiet as it flies by and everyone wanted to know when the next test flight would be. It is always a spectacular sight to see in the air.

As Mojave Transportation Museum president, I presented Hutchison with a Plane Crazy Saturday hat and a 35th Voyager Anniversary shirt as a thank you for his fantastic presentation.