Ashmore Motors to expand to a second location 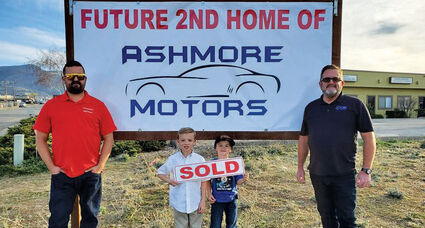 Ashmore Motors has been Tehachapi's only auto sales location since 2014 when Marlon Ashmore and his son Brandon opened their lot on South Street. Now, almost eight years later, their lot is still full of various makes and models of used cars and, more and more often, recreational vehicles, including large motorhomes.

"We thought about expanding before COVID," said Marlon, "but the pandemic short-circuited that idea. The large motorhomes are difficult to maneuver on our lot so we recently started to think about expansion again."

A vacant lot located just up the street seemed to be an ideal location but was not posted for sale. After talking with the owner, an agreement was made and Ashmore Motors now has a second location. Ashmore is still unsure exactly how it will be set up but he and Brandon have several ideas. In the meantime, it is a perfect location for their RVs. The sales office will remain at 20917 South Street, Tehachapi.

Ashmore said he hopes the new location will be operational by summer, so stay tuned. In the meantime, stop by and check out their inventory. They also buy cars, trucks and RVs whether they are paid for or not, and will give you a free appraisal of your vehicle. Contact them at (661) 823-4877.Pat Doody