Patrick James "Mike" Moreno of Bear Valley Springs, succumbed to his battle with cancer on January 25. He has left behind two daughters, Samantha, 37, and Reyelle, 7. 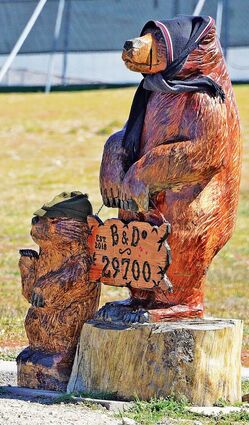 Carving done by Patrick for a home in BVS.

Mike was an accomplished artist who was widely recognized and known for his lifesized wood sculptures. He had a following of many local art collectors and his work was in high demand. His artistic talents didn't stop there. Friends and family knew of his musical abilities and would frequently gather to hear him play through his repertoire of rock, country and alternative tunes on his most prized possession - his acoustic guitar.

Everyone who was lucky enough to know him would say his trademarks were kindness, generosity and willingness to help people. Although his physical presence is missed terribly, he will live forever in the hearts and memories of those who loved him.