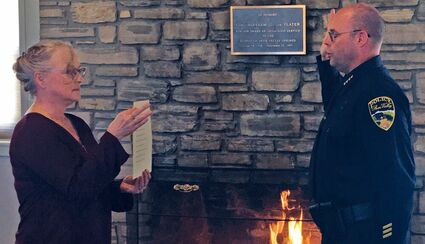 Dan Suttles being sworn in.

The most interesting, exciting event in Bear Valley this past week was the swearing in of a new police chief.

On Feb. 25, a large crowd gathered at the OTCC to see the transfer of power from our interim Police Chief, Jeff Kermode, to our new Police Chief, Dan Suttles. A large contingent of officers from his most previous place of command, Glendale, came along to wish him well. As well, several members of the CSD Board, CSD staff, some VIPS (Volunteer police), plus family and friends made up the crowd.

General Manager Bill Malinen opened the proceedings, then called up Interim Chief, Jeff Kermode who gave a heartfelt and helpful talk, welcoming our new chief and offering his support. Now, maybe, Kermode can semi-retire (again), for a few years. Our community owes him a huge thank you for his diligence in stepping up when the community needed him.

Chief Dan Suttles graduated from high school in Portland, Oregon, and joined the Marines where he served for eight years. After an honorable discharge, he joined the police force in Glendale, reaching the rank of Lt. Watch Commander. He and his wife, Diana, and young son, Devon, came up to visit our community, and they fell in love with it. Chief Kermode played a big part in introducing him to the community and bringing him on board.

Kristy McEwen, the administrative assistant to GM Bill Malinen, swore Chief Suttles in, and then his wife, Diana was given the honor of pinning on his new Police Chief badge.

We wish our new Chief well and welcome him and his family to this community. They plan to live here in Bear Valley Springs, and may even end up being your neighbor.

Bear Valley Springs is a private gated community in which the residents pay an annual association amenities fee. To visit, a non-member or non-resident must arrange with a friend or family member in the community for a guest pass that would permit them to engage in the activities. Guest passes will be checked.