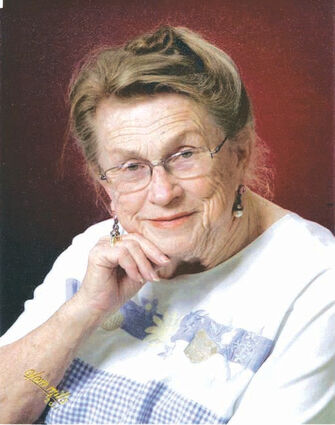 I was fortunate to be able to grow up, during most of my childhood, in the same town with long-time friends. These are people about whom we can say, "we go back a long way."

My children, as children of a military man, had to make adjustments when we would change duty stations. They would exchange letters with their left-behind friends and then the friendships would fade. One thing about military children is, they learn to make friends easily.

In 1936, a new Tehachapi grammar school was constructed on E Street on the site of an older school, a four room brick structure, which had to be torn down to make room for the new. It cost the sum of $43,000 and was a grand building with lots of windows, real slate blackboards, spacious classrooms and a large auditorium complete with a stage and hardwood floors to accommodate a student body of 217 students. In those days before television, Mr. Wells, the Principal from 1937 until his retirement many years later, would occasionally gather us, all eight grades, into the auditorium to operate a movie projector and show the whole student body educational movies. We saw pygmies in equatorial Africa, the Grand Canyon, the giant redwoods and other wondrous sites. Then, as an added treat he would rewind the film showing everyone going backwards. Lots of laughter. Today's children can reach around the world in seconds on their computers and are far more sophisticated than we were, but we were delighted when movie day came.

It was in that same auditorium that we gathered, on Monday, Dec. 8, 1941, to hear the radio broadcast of President Franklin Roosevelt as he asked Congress for a declaration of war against the Empire of Japan after the Pearl Harbor attack on Sunday, Dec. 7. On December 11, the United States also declared war on Germany and Italy creating a two-front war which lasted four years.

The only elementary school in town began classes at 9 in the morning and dismissed at 3:30 in the afternoon. The school bell rang loud and clear, first at 8:30 which told us we had 30 minutes until the 9 a.m. bell rang and classes began. The bell was rung by Bill Robison, the bus driver, janitor and general handyman. Mothers in town would say, "There's the 8:30 bell. You'd better get going!" People could set their watches by the bell's tolling.

In 1937, my family moved to Tehachapi from Mojave and I was the "new girl" in Miss Walton's fourth grade class. My mother had given me 15 cents, on that first day, to buy my lunch in the cafeteria. I was petrified to think I would not know how to buy my lunch and would make a mistake that would cause the other children to laugh. I asked the girl sitting next to me if she would be buying that day and she said yes. "Let's sit together," I offered. She agreed and I was careful to put her in front of me in line so I could imitate her actions. Now, 76 years later, Polly Marantos and I still remain friends. She just celebrated her 95th birthday in Clinton, Oklahoma, where she now lives.

We often carried our lunches from home but it was a treat to eat in the cafeteria which, at that time, was in large area behind the stage. A lady we called Aunt Minnie prepared the food. She was a wonderful cook. Her name was Minnie Mathiesen but I never heard her called anything but Aunt Minnie. Teachers and students alike cleaned their plates. One dish called Tollerina, is one I have never successfully duplicated to my satisfaction. No doubt, because I am no longer a 9-year-old fourth grader with nostalgic memories.

For a while we lived on a farm in Old Town and my brother, sister and I rode the bus to school. Bill Robison drove the bus as well as owning them (two). Monolith, Cummings Valley and Keene had their own grammar schools. One day, as we left school, I noticed my eighth grade brother, who was on crutches with a broken ankle, was not on the bus. I noticed him as we drove away valiantly trying to catch us. Bill drove faster and I asked if he'd wait for my brother and he said he didn't wait for anyone. Well, I figured my best card to play was to cry, which I did! I recall Bill and Bob Burgeis, big sixth graders at the time, saying simultaneously, "Oh don't cry!" I stopped crying as the bus stopped. Timing is everything.

Bill was a kind man, though. Each Christmas he had a crate of oranges from which we could all take one as we left the bus. An interesting detail in one of his busses was the windshield wiper set-up. A large, bent nail went through the upper ledge of the windshield and it had to be manually operated to work the wipers back and forth. I only got to do the job once for it was a highly sought-after task. Not exactly up to code, but it worked.

Moving to town allowed me to be one of the students drawn to school by the tolling school bell. It could be heard several blocks away and one usually met friends walking along.

After my husband retired from the Marine Corps and we moved back to Tehachapi, my youngest son, Tom, a 9-year-old fourth grader also attended Wells Elementary. Mr. Lantz was his teacher and Tom says he was the best teacher he ever had. The bell still called students up into the 1950s, but later it was mounted in front of the building on the sidewalk. Wonder where it is now.

Since the school has been closed, a painting of Mr. Wells that used to hang in the office now hangs in the local museum. I remember him as an excellent teacher, a fine principal and most of all, a gentleman.