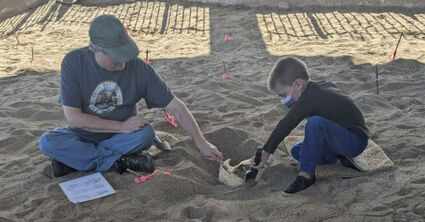 Recently we visited the Fossil Discovery Center in Fairmead, up in Madera County. This is a small facility outside Chowchilla which showcases the prehistoric life that once flourished here in what is now California.

There were fossil exhibits (reconstructions) of smilodon (saber-toothed cats), dire wolves, ground sloths and a huge mammoth. There are other exhibits for smaller animals too, plus some exhibits on the Native American culture of the area.

In addition, there is an area for children to "dig" for fossils and work to identify the species from a set of pictures they provide. While we were there, there were several children digging in the sand for these replica fossils. Sometimes they worked together, or with parents or grandparents, to discover fossil camel skulls, the skull of a short-faced bear and other fossils representative of the area.

So why is this facility located in the (really) tiny town of Fairmead? Back in 1993 while they were doing some digging for the Fairmead Landfill, someone spotted something odd in the dirt they had turned over. And they soon discovered it was a fossil. It seems during the Middle Pleistocene (around 700,000 years ago) the area was covered with ponds that provided drinking water to an abundance of different creatures. The conditions proved to be great for the creation of fossils and the area was filled with them.

Even today, the landfill is still turning up new fossils. In fact, there exists a job where someone follows behind the earth movers as they open up new ground and flags possible new fossil discoveries. Madera County collects these fossils and provides them for study. They have created the Fossil Discovery Center as a place where these fossils can be shared with the public.