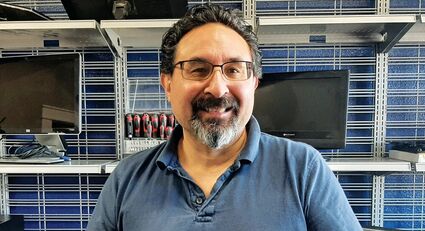 Control Alt Delete Computer Services, new location is now officially open. For over 21 Years, Guy Martin has been servicing the Tehachapi and surrounding areas with computer repair services for both Windows and Mac. Partnered with, and based out of Radio Shack, Guy has offered more than just computer repair services, including: audio conversion services from tape media to digital, digitizing VHS, VHS-C, Beta, Super 8, and even 8mm reels to DVDs. Guy also offers scanning and converting pictures and slides to digital format for use and sharing on computers, and for archival keepsakes.

After leaving the United States Marine Corps, Martin started a career in the IT field with Waste Management, as a System Administrator. After 11 years with WM, he moved to Tehachapi and decided to try his hand at his own business servicing computers and networks. That's when he met Chelly Kitzmiller, who introduced him to her husband, and owner of Radio Shack, Ted Kitzmiller. Ted offered Guy a space in Radio Shack from which to run his computer business, and that started an amazing friendship and partnership that lasted for over 20 years. 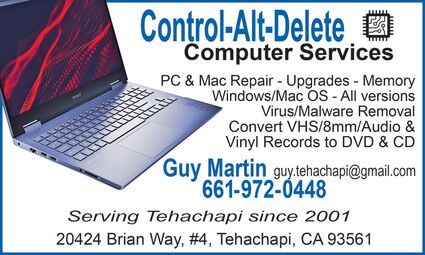 After Ted retired and sold Radio Shack in mid-2021, Martin moved to the new location with the new owner. Unfortunately, the new owner decided to close Radio Shack. That's when Martin decided to open his own repair shop, under the name Control-Alt-Delete. He is still offering the same services, and will also continue watch battery replacements. He will also carry See's Candy for the benefit of Have a Heart Humane Society. The proceeds will go to the rescue to help pay for the spay and neuter programs and clinics offered by Have a Heart.