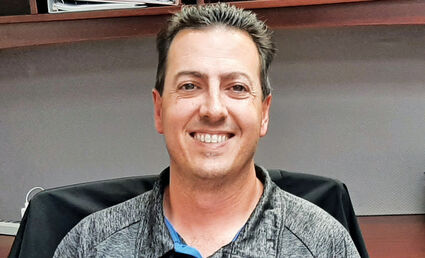 Hamed Jones, Tehachapi's new Director of Finance was introduced to the City Council at their February 7 meeting by City Manager Greg Garrett. Jones is taking over the city's financial reins from Hannah Chung who recently retired after over 20 years as the city's Finance Director. For the last four years, Jones has been the Administrative Services Director for the Bear Valley Springs Community Services District. Jones and his family have been Bear Valley residents since 2008.

Prior to the Bear Valley position, Jones had worked for the City of Palmdale since 2004, not long after his graduation from UCLA. He holds a bachelor's degree in mathematics/applied science with an accounting and management plan and a master's degree in accounting and finance from Keller Graduate School of Management. He began as an account clerk in Palmdale and worked his way up to assistant financial manager and deputy city treasurer. His government experience includes cash receipting, debt management, assessment district administration, cash management, financial statement reporting and budget preparation and monitoring. In his capacity as Tehachapi's finance director, Jones will be in charge of accounting, financial reporting, budgeting, fiscal planning, project costing, transit operation and risk management for the City of Tehachapi.

Jones had the opportunity to meet Hannah Chung a number of years ago while he was working in Palmdale and they had kept in touch. It was Hannah who suggested that he submit his resume to the City of Tehachapi.

Jones said he always had an affinity for math. He started college as a computer science major with a tech scholarship and even had a summer job in computer science at Edwards Air Force Base; however money and finance had always intrigued him more than computer science. After some thought, he changed his major to Mathematics and as UCLA didn't have a true finance major, one was created that came close.

A true Bruins fan, Jones says he follows all UCLA sports and sports recruiting. His personal playing experience growing up was in soccer and basketball. Jones said he played lunchtime basketball while he was working in Palmdale and has done some coaching. His not-so-secret passion is fly fishing. He said he has a secret spot somewhere never-to-be-revealed on the Owens River where he loves to go and it rarely disappoints.

"I'm truly grateful to be working for the city I live in and to have the opportunity to make a difference," said Jones.