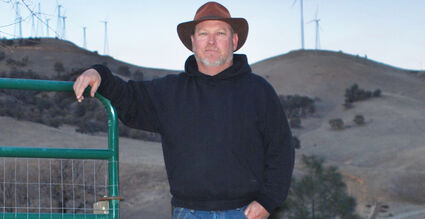 Jon Lantz on the 170-acre Cameron Canyon cattle ranch that his family started in the 1940s.

I started dating Helen Owens in May of 1982. She is the youngest daughter of Kelcy and Margie Owens, who had Kelcy's Restaurant on Tehachapi Boulevard. Helen and her sister Kathy told me about a new company called Zond Systems that had recently moved into the Talmarc Building on Curry Street (now home to the Family Life Pregnancy Center). Since the company was located just down the alley from Kelcy's, Zond employees came in to eat almost every day and had mentioned that they were hiring. I went into the Zond building, applied and got hired as a laborer in September of 1982. At the time, I knew virtually nothing about the new wind industry.

I got paid $6 an hour, and was around the 12th or 13th person hired by Zond. They called us 'The Dirty Dozen' and there was no job description, job title or job division -- you just worked for Zond and did whatever needed to be done. You'd dig ditches, pull wire, operate equipment if you knew how, weld, pour concrete, whatever. If you knew how to run a backhoe, you jumped on it. Growing up on the ranch, my dad had taught me a lot of practical things and I knew how to weld, so my skill set worked well.

Zond's entire fleet of turbines in 1982 consisted of 13 Storm Master machines. They were small, three-bladed turbines with lattice-type towers. They had flexible blades that would turn very fast – the tip speed would reach 118-120 miles per hour. In high winds blades would bend back and hit the tower. It was a disastrous combination. They simply couldn't take the wind and winter conditions we have here – it can get brutal. So Zond was experimenting with different turbines. In 1982 we had a push to install 10 Windmatic machines, which were 14s (rotor diameter), 65-kilowatt turbines that had wooden spars with a fiberglass shell around them. In my first year we also put up 10 Polenko turbines from Holland, which were 100kw machines with tube towers, and two 65kw Vestas turbines from Denmark.

Working conditions in the early days were informal, to say the least. We took our own trucks to the job site and worked out of them and used our own tools. Guys would bring their dogs to work with them, and of course your lunch, water and anything else you might need, because there was nothing up on those ridges. On a lot of days you wouldn't even see your boss on the job site, you just did what needed to be done. One time Kenny Williams looked up to see his 1956 Chevy truck starting to roll, and before he could get to it, the truck picked up speed, went over the edge and then rolled over and over down a slope into the canyon at the bottom. We had to get a bulldozer to pull it out of there, and of course that was the end of that truck.

When I first started climbing, you wore a single belt around your waist with some D-rings that you used to attach some tools. You then free-climbed up the lattice tower with no climbing protection, and when you reached the top, you hooked a lanyard around the tower. That was it. Later that advanced to a belt that included two loops that you'd put your legs through, but it still wasn't a proper harness like they use today. We'd also climb towers that had a runaway turbine whose blades were freewheeling – we'd climb to the top to throw a lever that activated a braking system to stop them. We'd climb in high winds, and do a lot of things that are strictly against safety codes today.

In 1983, Zond ramped turbine installation, adding 20 more Windmatics, five more Polenkos, and 65 Vestas turbines. There were lean times financially for the company, when The Dirty Dozen were reduced to 20-hour work weeks, but 1984 and 1985 were years of exponential growth for both Zond and the wind industry in general, in what is referred to "California Wind Rush" of the 1980s. By the end of 1985, we had put up 300 turbines in Palm Springs, 240 at nearby Painted Hills, 200 in Altamont Pass, 400 at what we call 33 East, commonly known as the 'Windwall' on the ridge at the east end of the Tehachapi Valley. . . We went from having a dozen guys to having crews of 200 people working at three different sites simultaneously. From 1982 to the end of 1985, we put up approximately 1,500 turbines. It was a wild ride.

Jon Lantz went through multiple promotions at Zond, with job titles that included Operations Maintenance Superintendant and Safety Supervisor and Wind Facility Operations Manager. He spent 16 and 1/2 years with the company before leaving to work for other wind companies. Today he owns Eight Bar Brand wind energy consulting, drawing off his 40 years in the wind industry. He and Helen live on their 170-acre ranch in Cameron Canyon, enjoying life in the Tehachapi Mountains, and both their sons, Scoutt and Levi, have been involved in wind energy. 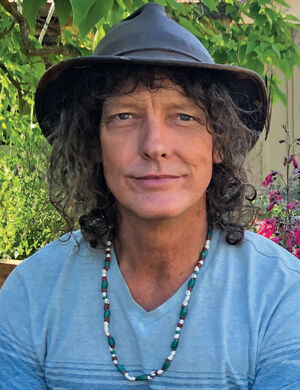