George Novinger: a life of adventure and service 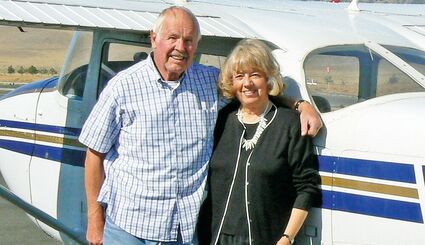 George and Anne Marie Novinger by their Cessna 172 at Tehachapi Airport.

Many people throughout the Tehachapi area, Southern California and points much farther afield were saddened to learn of George Novinger, 89, who passed away peacefully at his home on February 4 with his family by his side following a lengthy illness.

George was well-known for many different accomplishments: as principal of Tehachapi High from 1982-1992; as one of the owners and creators of The Apple Shed; as a pilot and one of the founders of the Tehachapi Society of Pilots; as a Ranger-Naturalist at the Ancient Bristlecone Pine Forest in the White Mountains; and as a captain of the Montrose Search and Rescue team.

He was also active in the community in many other ways, assisting with different service organizations, civic projects and just always doing more than his share to help with bettering the town. Everything from planting daffodils around Tehachapi to helping get people to vote for the bond issues that resulted in our beautiful new hospital – George helped with all of these endeavors.

So as a man who held so many positions of responsibility and authority in his life, George was probably a pretty serious, somber person who liked everything completely planned out and predictable, right? No, actually he was a very enthusiastic, adventure-loving person who was known for spontaneity, courage, and humor. And he was a firm believer in people – in their value and in their potential.

George was one of five children, and the only boy, born to his family in Lewistown, Montana on May 30, 1932. Both of his parents were schoolteachers, and his father moved the family to Glendale when George was 11 years old so that the kids would have a wide selection of colleges and universities from which to choose.

George attended and later graduated from Herbert Hoover High School in Glendale, but that wasn't the end of his association with Hoover: he later returned as a math and science teacher, coach, driving instructor and school administrator for a total of 27 years. One of his former students was Claudia Baker, the founder and publisher of The Loop newspaper.

George got a bachelor's degree from Occidental College in Los Angeles, a liberal arts college in the community of Eagle Rock that was founded in 1887. It was there that he met Anne Marie Kurtz, who would soon become his wife of 67 years. The two eloped and were married in Las Vegas in 1954, traveling there in an open World War II Jeep in 100-degree-plus weather. Anne Marie remembers them buying a block of ice to carry in the Jeep with them as a primitive means of cooling down during the long hot drive to Vegas.

It was just an early example of the many adventures that awaited her as the partner of George Novinger. They roamed the globe together on trips and vacations, often staying in local housing or camping out, exploring up rivers and in the back country in areas from Borneo to Paraguay to the Galapagos. They made 60 trips down to Mexico, bouncing in their dune buggies or flying in their Cessna 172 with George as the pilot, as well as flying to Death Valley, the Owens Valley and elsewhere. These various adventures, from the High Sierra to Europe, sometimes included hardships and discomfort, but George Novinger was nothing if not tough, and Anne Marie was his gracious and beautiful wife who did her best to keep up with her rugged, robust and gung-ho husband.

In addition to his other pursuits, George loved to hike and climb in the mountains. He climbed Mt. Whitney using the more difficult Mountaineer's Route not once, or twice, but 12 different times. He also climbed the Eiger in Switzerland and the Grossglockner, which is Austria's highest mountain. He often mentored younger people, leading hiking and camping trips to help foster an appreciation for the outdoors.

When once asked for his two top camping tips for others, George responded "Anticipate the essentials and take little else. Enjoy the challenges of going without! And in doing these things, you will really achieve a closeness with nature and the environment."

George lived in Tehachapi for 40 years, beginning when he took the THS principal job in 1982, but he didn't have to make all new friends – some of the people that he had known in Glendale and other parts of California also ended up in Tehachapi. These included Barbara Ferrante, Mike and Kim Nixon, Laura Grant, Louise Forbes, and Liz and Bill Davis. Two couples, Jackie and Rolf Ruckhaber and Connie and Bob Nixon, both ended up moving to Tehachapi after visiting the Novingers in Tehachapi.

George maintained long and lasting friendships, and he also continued to make new friends, because he was an engaging, outgoing person who had respect for and interest in other people. He spent 20 years working for the U.S. Forest Service as a ranger in the Ancient Bristlecone Pine Forest, and he became very educated about the incredible bristlecone pine trees, and he like to share that information with visitors. Even at the very end of his life, he became close with his three caring and devoted caregivers: Brittany Chavez, Kathleen Bloom and Melissa Kelly. People just naturally developed love and affection for this very authentic, widely experienced, fun-loving and accomplished human being. 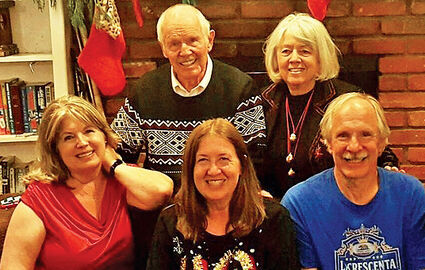 George and Anne Marie Novinger and their three children: Mary, Barbara and Tom.

George Novinger was a 20th century man, an optimist who saw life as being full of potential and possibility. He made the most of his life, and he encouraged others to do the same. Those of us who had the privilege of knowing him will continue to remember him and be inspired by him for the rest of our days.