Tony LeVier – the extraordinary life of a distinctive test pilot 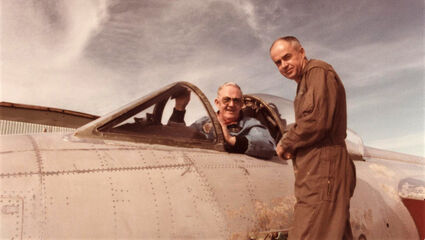 Born in Duluth, Minnesota on Valentine's Day, February 14, 1913, Anthony "Tony" LeVier began life with the last name of Puck. When his father passed away, Tony's mother moved her two children to California for warmer weather. She remarried when Tony and his sister were teenagers and her new husband, Oscar LeVier, gave the children his name.

During several interviews, Tony LeVier cited the epic 1927 flight of Charles Lindbergh crossing the Atlantic Ocean to Paris, France as his inspiration to learn to fly. Upon hearing the news of Lindbergh's flight, he proclaimed to his mother, "I'm going to become an airplane pilot!" His ever supportive mother said, "That's wonderful Tony, just remember to be a good one." Obviously those words from his mother stayed with him throughout his life.

While at an event in Hawthorne, he explained how he was going down the aisle of the Balboa Theater on July 4th and spotted what he thought was a dollar bill. He picked it up with his toes, he and his friend were barefoot. "I unraveled it and it was a 10-dollar bill," Tony said. "The first thing that came into my mind was to take a flying lesson the next day."

He went to Santa Ana Airport to get his flying lesson, but they said he was too young and he didn't have a 'student permit' that cost ten dollars. He left that airport and went to Whittier and received his first 20-minute flying lesson for five dollars. "That started my flying career," said Tony.

"I was totally devoted, 100% devoted to aviation," he said during the interview. "I could think of nothing else and I think that is what carried me through all these years." He gave credit to his supportive parents. He said, "That kept me going, too, and I just fell into one good thing after another.

"I have to give credit to so many people who helped me," Tony said. "I was an airport brat, a grease monkey. I was the 'go-fer' at the airport. I did everything, I learned on work on engines and airplanes. I was an accomplished mechanic at about sixteen years old."

He was so absorbed with the thoughts of flying that he dropped out of school and hung out at the local airport doing whatever he could to earn a little money to pay for flying lessons. He was completely driven to learn to fly.

His first job was with the Whittier Airways Company as a night watchman and mechanic making $100 a month. "$80 for flying lessons and $20 to live on," said LeVier. "I never dreamed of being a test pilot," he said. "I wanted to be an air mail pilot and an airline pilot, but I couldn't pass the physical examination." For some reason it proved to be an erroneous exam. Years later it was changed to an EKG for checking the heart and he passed.

Over a two year period before he soloed, he had six different instructors. After earning his pilot's license, he received his commercial license in 1932, when he was 19 years old.

In 1936, he started air racing, first in Los Angeles and then in Cleveland, Ohio. He also flew in the Thompson Air Race in Cleveland winning the Greve Trophy.

LeVier told great stories of his flight experiences lacing them with many expletives. In the 1960s and 70s, he was a regular at Mojave Airport, visiting with General Manager Dan Sabovich and other pilots up and down the flightline.

Al Letcher had the first Hawker Hunter to be flown into the United States. Naturally, LeVier had to sit in it and share flying stories with his friend.

LeVier joined Lockheed Aircraft Company in 1941 and ferried Hudson bombers from California to Canada for the Royal Air Force (RAF). He later trained and checked out pilots in the Hudson and its transport variant, the Lodestar. His job description was changed to engineering test pilot in 1942 to fly the PV-1 Ventura.  His test flying was instrumental in proving the Lockheed P-38 Lightning design. He and chief engineering test pilot Milo Burcham alternated flying dive tests to observe the design's performance at transonic speeds. To demonstrate the reliability of the design in the hands of a skilled pilot, he performed aerobatic shows for students at the Polaris Flight School at War Eagle Field in Lancaster, California. That location is now the Mira Loma Detention Center.

He was instrumental in solving the compressibility issue or "mach tuck" that plagued the P-38 during high speed diving maneuvers. Kelly Johnson's team of engineers designed a dive flap to be used while diving at high speeds, so the tail of the aircraft could maintain its authority.

According to a flight test website, Tony LeVier was responsible for several inventions and contributions to airplane ergonomics and safety.  For example, in 1944 he conceived the idea to turn the pilot's stick grip counter-clockwise in the XP-80 to enable the pilot (who manipulated the stick with his right hand) better use and control of the aircraft.  The same year, he conceived the idea to place aircraft trim switches on top of the control stick grip, now universally used on all military and some civil aircraft around the world.  In 1949, he conceived the first practical afterburner ignition system for jet fighters. He contributed to the design refinement of the Lockheed hydraulic- boosted and full-power flight control system, used in all aircraft since the P-38 of World War II.

Other LeVier inventions included his 1951 invention, the automatic wing stores (ordinance) release for military aircraft to prevent aircraft crashes from asymmetric loading due to malfunctions, now universally used by all military combat aircraft. In 1952 he invented the Master Caution Warning Light System for aircraft, the universally used system on most aircraft in the world.

The following is from his Eulogy – "In 1954, the XF-104 Starfighter roared aloft on its maiden flight. Called "The Missile With a Man In It," LeVier used it to become the first man to exceed 1000 miles per hour. The F-104 became the standard bearer of the free world, and 15 countries adopted it as their superiority fighter. For the next 10 years, LeVier managed Lockheed's Starfighter Utilization Reliability Effort with NATO countries, contributing immeasurably to saving lives. He also assisted famed aviatrix Jackie Cochran when she set a new world's speed record for women. 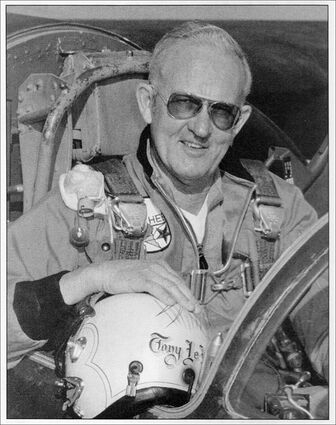 "LeVier flight tested Lockheed's top secret U-2 in 1955, which later earned banner headlines when one was downed while making reconnaissance flights over the Soviet Union. LeVier's active test pilot career ended when he became Lockheed-California's Director of Flight Operations. Of him, Lockheed's famed 'Kelly' Johnson stated, 'I like LeVier to fly my aircraft first because he always brings back the answers.' Years later, LeVier piloted a Lockheed 'Tristar' from California to Washington, D.C. on the first completely automatic flight of a commercial plane."

LeVier retired from Lockheed in 1974. During his career he distinguished himself as the world's foremost experimental test pilot. He made the first test flight of 20 different aircraft and flew over 240 different types – more than any other pilot in history.

Tony LeVier died after a lengthy illness battling cancer and kidney failure at his home in California on February 6, 1998.