A serpentine line of over 200 people waiting patiently to donate.

Hundreds of Tehachapi residents turned out at the Save Mart parking lot on Saturday, Jan. 16 to attend a community fundraiser and Celebration of Life for Aaron Abbott, a long-time Save Mart employee and friend to so many Save Mart shoppers. Abbott had grown up in Tehachapi, attended Monroe Continuation High School and has recently passed away leaving only one remaining family member. Mano Lujan, owner of the Red House BBQ, said that over the years he had talked with Abbott discussing "everything from daily happenings to classic cars."

When he learned that help was needed for Abbott's funeral expenses, Lujan proposed a fundraiser. He said that he talked with local Save Mart management who helped him approach corporate with the idea of having one in the Save Mart parking lot. 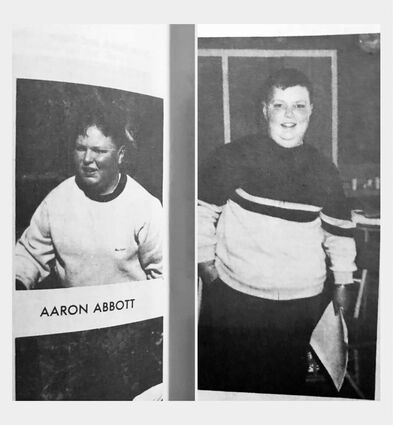 Lujan grilled his signature tri-tip and sold tri-tip sandwiches with chips and water for $10. Save Mart donated the chips and water and got Mano a better price on tri-tip. Red House BBQ donated everything else. Music and entertainment was provided by local band Big Game Ticket.

Lujan originally planned to hold the event from 11 a.m. to 2 p.m. However, by 2:30 there was still a serpentine line of over 200 people waiting patiently to get their sandwiches and to donate.

Over 500 meals were served and $9331 was raised. The money is going towards Abbott's funeral expenses which, according to Lujan's recent Facebook post, has been met. He added if anyone wishes to give more to consider donating to a local animal nonprofit in Aaron Abbott's name. "He was a huge animal lover."

Lujan also wrote, "The old saying that 'nice guys finish last' was proven wrong that day. Aaron was/is a nice guy and loved by many. That was proven Sunday. Move over George Bailey, Aaron is the richest guy in town!"