Stratolaunch's Roc returns to the air 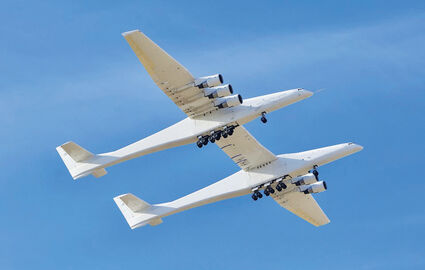 Another exciting flight test day at Mojave Air & Space Port with the gigantic Stratolaunch aircraft taking to the skies for her third flight at 8:47 a.m., Sunday, Jan. 16.

She carries the nickname Roc, after a mythical giant bird and is the world's largest airplane by wingspan: 385 feet!

In the left seat was senior test pilot, Mark Giddings and Evan Thomas was co-pilot. Thomas is Stratolaunch's director of flight operations and piloted Roc's first two test flights. Jake Riley was onboard as the crew's flight engineer.

The massive twin-fuselage, six-engine aircraft was designed by Burt Rutan and funded by Paul G. Allen with the intent of being a mothership that would launch rockets and satellites into low Earth orbit. The mission changed after the unfortunate death of Mr. Allen. When new owners acquired Stratolaunch in 2018, the decision was made to use Roc as a launch platform for hypersonic test vehicles that would reach speeds of Mach 6.

The Talon-A is a hypersonic vehicle that will offer customers a way of rapidly testing advanced flight technologies. It can be outfitted out with different payloads and will be fully reusable.

During a webcast presented by NASA Spaceflight.com, Stratolaunch design engineer Grace Wang said six to eight flight tests were planned in preparation for operational hypersonic launches. Stratolaunch's chief technology officer, Daniel Millman, said during a post-landing teleconference that the next test flight would expand the envelope for landing-gear operation, and that the pylon for the Talon-A hypersonic test vehicles would be installed for the fifth test flight.

The first two Talon-A vehicles, TA-0 and TA-1, are under development. Initial power-on testing was completed in late December.

Zachary Krevor, Stratolaunch president and chief operating officer, says the flight met all objectives and takes the company "one step closer to hypersonic flight with our Talon vehicles."

During the flight, the crew accomplished evaluation of the aircraft's performance and handling characteristics at altitudes up to 23,500 ft. and airspeeds up to 180 knots. The flight included validation of the left mid-main gear, including door operations, and alternate gear extension. The complete gear is expected to be cycled on the upcoming fourth test flight.

According to a Stratolaunch press release, Millman said, "Before the end of the year we plan to and hope to launch our first hypersonic test vehicle, TA-1."

"It will also land - we will flare it into the Pacific. Our goal is to prove we can go hypersonic. We will do that envelope expansion first and then with the first reusable Talon - TA-2, which will fly in 2023 - we will begin with glide tests, probably into Vandenberg, Space Force Base, Calif."

"By the end of 2024, we are targeting to have a fleet of three fully reusable hypersonic testbeds providing services for the nation in advancing hypersonic payloads and other things that we'll be able to test them."

Senior pilot Giddings made a picture perfect landing on Runway 30 at Mojave Air & Space Port at 1:10 p.m., concluding a four hour, 23-minute test flight. It was the longest mission since the first flight on April 13, 2019.