Grasshoppers: summer is the season for Atakapizhi 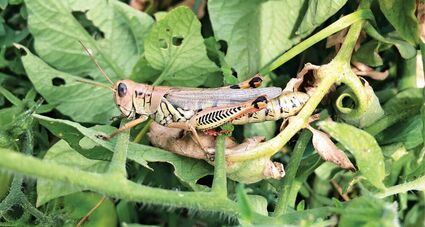 A grasshopper sitting on a tomato plant. This is a type known as a Spur-throated Grasshopper.

One summer morning I was in Antelope Canyon, south of Highline Road, gathering willow shoots with Chemehuevi basketweaver Weegi Claw and her mother, Lila McCord. As we walked along a dirt road, an insect rose up from the ground just ahead of us in a flash of cream-colored wings, making a subtle cricking sound and landing 20 feet away.

"Atakapizhi!" exclaimed Lila in her soft, musical voice. She said the Chemehuevi word for grasshopper, which is identical to the Nuwä (Kawaiisu) name. Both tribes are in the larger Southern Paiute group, and are linguistically similar.

The creature was a Pallid-winged Grasshopper (Trimeritropis pallidopennis), one of the most common and widespread grasshopper species found in the Tehachapi Mountains. There are more than 200 different species of grasshoppers in California, and perhaps a dozen in our area.

Pallid-winged Grasshoppers are in a category known as band-winged grasshoppers, because all of these species have markings on their hindwings that are very noticeable when they fly, but invisible when they land and fold their wings.

This is a type of defense called reverse flash protection, and serves to confuse predators. If a bird or other predator sees a Pallid-winged Grasshopper in flight, it focuses on the grasshopper's cream-colored hindwings, edged with a dark band. But if the grasshopper manages to land on the ground, suddenly the color vanishes underneath its incredibly well-camouflaged forewings and it seems like the grasshopper vanishes into thin air, leaving the bird confused and the hungry predator flies away.

From the time I was a little boy, I've walked along trails and dirt tracks in the Tehachapi area and had Pallid-winged Grasshoppers fly up in front of me. I would try to watch exactly where they landed, since they don't fly far, but usually I still couldn't spot them. The grasshoppers would remain motionless until I got very close to where they were concealed, and then they'd fly out of reach and disappear down onto the ground again.

Grasshoppers in the Tehachapi Mountains typically begin their lives in the early spring, when warmer weather causes them to hatch from eggs that the adult females laid the previous autumn in undisturbed areas, like gentle hillsides with clumps of grass.

The tiny grasshoppers hatch out and begin feeding on green vegetation. They aren't as selective as some young insects, like many butterfly larvae, which will only feed on plants in one genus or family.

During years with favorable conditions, grasshoppers can erupt in large numbers, and they will mow down most greenery they encounter. Densities can exceed 40 grasshoppers in every square yard. California's drought over the past couple of years have actually been beneficial to some grasshopper species, and they consumed lots of vegetation. Last year, grasshoppers even ate a lot of the endangered Bakersfield Beavertail Cactus that California Native Plant Society members transplanted onto ranchland purchased by The Nature Conservancy near Caliente.

There was a year back in the 1940s when there was a grasshopper plague in the Tehachapi Mountains. My uncle told me that grasshoppers would eat anything green and growing, and they even would land on my grandmother's clean laundry hanging outside on the clothesline and chew holes in it, and eat the paint off the sides of chicken houses.

On their small farm, my family had what was called a "truck garden" of vegetables that they would sell from their roadside stand or take down to Mojave and sell out of the back of an old pickup truck. To protect the garden from the grasshoppers, each morning they'd turn about 50 bronze turkeys into the garden area, and they would eat their fill of the grasshoppers. Chickens will eat grasshoppers too, but the chickens would also damage a lot of the vegetables. The turkeys were mostly content to just stick to eating grasshoppers. My uncle said that the turkeys would get so full of grasshoppers, they would no longer actively hunt them but would just sit in one place and snap up any insects that came within reach. Eventually the vegetable garden was an island of green surrounded by bare ground denuded by grasshoppers.

While grasshoppers in large numbers can cause problems for ranchers, farmers and gardeners, it is also true that birds, lizards and smaller mammals of many kinds rely on them as an important food source for themselves and their young. California Quail, for example, supplement their seed diet with young grasshoppers. 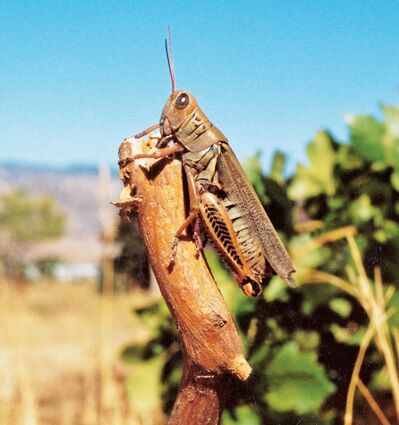 Grasshoppers are part of every summer in the Tehachapi Mountains.

American Kestrels are North America's smallest falcon species and can often be seen perched on power lines in the Tehachapi area. These little raptors consume lots of grasshoppers. The grasshoppers convert grass and other vegetation, which are nutritionally useless to predators, into a high-protein, fairly easily obtainable food source.

When each summer rolls around, a stroll through the countryside will usually bring the sight of birds, butterflies and atakapizhi (pronounced ah-tah-kah-peezsh-eh). I look forward to it.