Veterans remembered on Dec. 18 with Wreaths Across America 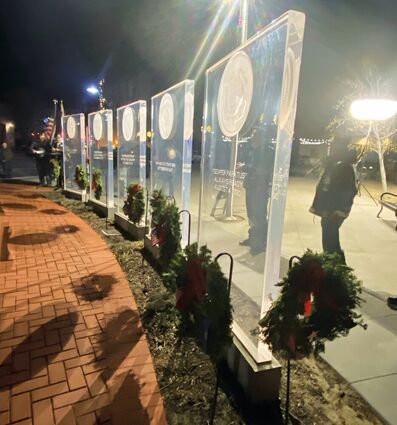 Wreaths were hung in front of each military monument. The one on the end closest to the camera is in honor of the POWs and MIAs who never made it home.

On the evening of Dec. 18, the community of Tehachapi came together at Freedom Plaza on the corner of Tehachapi Blvd. and Curry St. after laying over 720 holiday wreaths on the tombstones of every veteran in Tehachapi's Eastside and Westside cemeteries for a brief yet moving ceremony. Tehachapi was only one of over 3,000 communities across the country to participate. The mission statement of Wreaths Across America is "Remember, Honor, Teach." Ideals that were embraced that day.

Jason Stanley, Commander of the Sons of the American Legion, hosted the event which was organized by Robert Peralta, president of 5150 Dieselz and his wife, Debi Peralta. Beginning the ceremony with the Pledge of Allegiance, Stanley thanked all the volunteers, organizers, veterans and veterans organizations present for their part in honoring the graves of Tehachapi veterans of all military branches. Christine Yandek, herself a veteran, beautifully sang the National Anthem.

The main part of the ceremony was when veterans took turns placing wreaths on special holders before each of the glass military monuments at Freedom Plaza, collectively honoring all the servicemen and women who have served and are serving each military branch.

veterans ceremoniously hung a wreath in front of each monument for the Army, the Marine Corps, the Navy, the Air Force, the Space Force, the Coast Guard, and the Merchant Marines. But most moving to me personally was when "Pops" Jim Davis hung a wreath at the end of the row of monuments to honor the 93,129 U.S. servicemen from all branches of the service whose last known status was either Prisoner of War or Missing in Action. "These individuals have never returned to their families and homes," Stanley said solemnly. Adding the promise, "We shall not forget you."

Jeanie Settelmyer, mother of an active-duty Marine, spoke briefly thanking Tehachapi for supporting the event. She exhorted veterans to share their experiences of fallen servicemen with their families to help keep the memory of their sacrifice alive. The ceremony fittingly concluded with a 21-gun salute and a bugle playing Taps. It was a beautiful and stirring event.