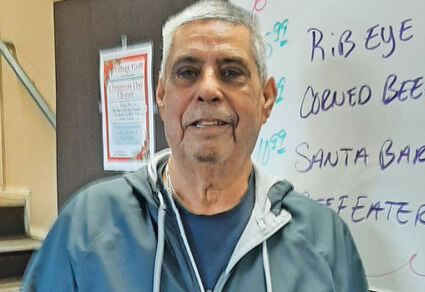 The Village Grill is one of Tehachapi's long-lived restaurants but few are familiar with the man who has owned it for the last 14 years.

Born and raised in Zacatecas, a municipality located in north-central Mexico, Juan Rodriguez moved to the United States in 1971 and settled in Orange County where he began working as a line cook, an occupation he has proudly held to this day. Looking for a better place to raise his four children, he bought his first house in Palmdale in 1984.

Juan officially retired as chef five years ago in November, but that doesn't mean he has left the Village Grill. Tehachapi is still Juan's home several months out of the year and he loves it here. When he is in Tehachapi he is at the Village Grill almost daily, always on hand to fill in as a cook or work a short-shift in the kitchen when needed. His youngest son Ivan has taken over management and when Ivan needs to prep for meals, Juan joins the line. "I have been a cook all my life," he said proudly.

When Juan is not in Tehachapi, he spends time in Zacatecas where he owns a home and where some of his family members still live. When asked what he does there, he quickly responds, "I ride my bike." Otherwise, he said he just hangs out with his brother and three sisters. He plans to leave Tehachapi again for Zacatecas early January.

Juan is very proud of his children and grandchildren who all live in California. His oldest son, John, is a social worker and is married with two grown children. His middle son, Fabian, works for Edison. He and his wife have three sons and live in Tehachapi. Juan laughed that Fabian was always very popular in high school and that he would get calls from the school almost every week during the school year. His youngest son, Ivan, is married with two daughters. Juan's daughter, Sandra, is a registered nurse.