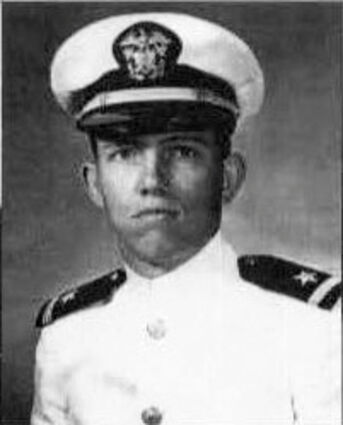 (Note: This is the twenty-ninth article in a continuing series about local military veterans and their service to our great country.)

Born on July 10, 1941, Gilbert Louis Mitchell is the only U.S. serviceman from Tehachapi initially declared "Missing in Action" (MIA) during the Vietnam War.

Gilbert enlisted in the U.S. Navy Reserve in 1964. Following flight training, he was eventually assigned to Attack Squadron 75, Carrier Air Wing 11, aboard the aircraft carrier USS Kitty Hawk (CVA-63), which, by early 1967, was conducting around-the-clock air combat missions over North Vietnam as part of the U.S. 7th Fleet. (Unfortunately, no information could be ascertained about Mitchell's early life or first years in the Navy.) Specifically, Lieutenant (0-3) Mitchell was the bombardier/navigator on a Grumman A-6A Intruder - a two-seat, twinjet, all-weather attack aircraft capable of carrying 18,000 pounds of bombs and/or missiles.

On March 6, 1968, the USS Kitty Hawk was on station off the coast of North Vietnam in the Gulf of Tonkin. At 0215 hours that morning, Mitchell and his pilot, Lieutenant Richard C. Nelson, launched off of the carrier as part of a four-plane package. Their mission was to strike the Haiphong railroad yard (on the Gulf, east of Hanoi), one of the most heavily defended targets in North Vietnam, bristling with numerous surface-to-air (SAM) missile sites, light and medium anti-aircraft (AA) guns, as well as automatic and small arms weapons.

After launch, at 2035 hours, Lieutenant Mitchell's aircraft completed a good radio and IFF (Identification Friend and Foe) check with the airborne radar controller. This would prove to be the final contact with the plane, at a location approximately 35 miles southeast of Haiphong. Intense AA fire had been reported in the Haiphong area at their aircraft's proposed time on target, while visibility was restricted to barely three miles due to a thick haze. During the mission, the four attack aircraft had split up to engage separate targets, while operating under strict radio silence to avoid detection by the enemy.

Having completed their assigned tasks, the A-6 strike package winged its way back toward the safety of the USS Kitty Hawk-the airborne radar controller accounting for all of the aircraft except Lieutenant Mitchell's. No emergency beepers or emergency IFF were observed. As a result, search and rescue (SAR) operations, consisting of helicopters, destroyers, and electronic surveillance, rapidly got underway, albeit with a negative outcome. Because of the extensive hostile threat, no SAR operations were undertaken in the target area. (Sources: http://www.loc.gov/item/powmia/pwmaster_37288; http://www.loc.gov/item/powmia/pwmaster_37307)

While the specific details are unknown due to the radio silence, what is clear is that, at some point in the mission, Mitchell's A-6 Intruder was either shot down or crashed. Both Nelson and Mitchell were at first declared missing in action. In July 1984, the Vietnamese "discovered" the remains of Lieutenant Commander Nelson (both men were posthumously promoted to Lieutenant Commander, or LCDR) and returned to U.S. control. In August 1994, Nelson was buried with full military honors at Arlington National Cemetery, across the Potomac River from Washington, D.C. "The 10-year delay between repatriation and burial was due to difficulties in tracing surviving relatives and obtaining DNA for a match and positive identification." (www.aviation-safety.net/wikibase/158673)

The Vietnamese government has yet to "discover" the remains of LCDR Mitchell. His status, however, effective Oct. 9, 1973, was changed from MIA to KIA (Killed in Action). According to a U.S. Army report (June 1984), LCDR Mitchell is currently carried in the status of "Dead, Remains not Recovered"). (www.loc.gov/item/powmia/pwmaster_37255)

Along with more than 58,000 U.S. servicemen who perished during the 15-year Vietnam War, Gilbert L. Mitchell is honored on the Vietnam Veterans' Memorial in Washington, D.C. - his name inscribed at VVM Wall, Panel 43e, Line 26. For those readers who haven't visited the wall, this vivid description from Wikipedia:

"The Memorial Wall is made up of two 246-foot-9-inch (75.21 m) long black granite walls, polished to a high finish, and etched with the names of the servicemen being honored in 140 panels of horizontal rows with regular typeface and spacing. The walls are sunken into the ground, with the earth behind them. At the highest tip (the apex where they meet), they are 10.1 feet (3.1 m) high, and they taper to a height of 8 inches (200 mm) at their extremities. Symbolically, this is described as a 'wound that is closed and healing' and exemplifies the Land art movement of the 1960s which produced sculptures that sought to reconnect with the natural environment. The stone for the 144 panels was quarried in Bangalore, India."

While all of us - whether we've visited the site or not - are certainly aware of the Memorial Wall in DC, much less well known is the virtual Vietnam veterans' Wall of Faces. Established by the Vietnam veterans Memorial Fund (VVMF), the Wall of Faces "features a page dedicated to honoring and remembering every person whose name is inscribed on the Vietnam veterans Memorial in Washington, D.C. In an effort to further preserve the legacy of those who sacrificed all in Vietnam, VVMF is committed to finding a photo to go with each of the . . . names on The Wall. The Wall of Faces allows family and friends to share memories, post pictures and connect with each other." (www.vvmf.org/Wall-of-Faces)

A photograph of Gilbert, looking dashing in his Navy uniform and taken in the fall of 1964 (see accompanying photograph), is among the thousands to be found on the virtual Wall of Faces. Click on "View Profile" and you will see moving "Remembrances" left for Gilbert by dozens of strangers who, to this day, honor his service and ultimate sacrifice for our country. Cited below are three of the more recent remembrances.

"I ordered my MIA bracelet when I was 12 years old. I followed the lists in the newspaper, but never saw Gilbert's name. On Memorial Day 2021, I will visit half-size Moving Wall to find Gilbert's name. My condolences to his family."

"Dear L.Cdr. Gilbert Gilbert Mitchell, Thank you for your service as an Unrestricted Line Officer - Pilot on THE USS KITTY HAWK. You are still MIA. Please come home. Saying thank you isn't enough, but it is from the heart. Happy Halloween. Time passes quickly. Please watch over America, it stills needs your strength, courage and faithfulness, especially now. Be at peace."

"I bought a Vietnam bracelet when I was 12 years old. Searched the newspaper everyday to see if his status was ever updated from MIA but found nothing. I put the bracelet away in a jewelry box and carried it with me for 47 years and today took it out to finally put a face to this name. It means a great deal to me. I will honor him and all the other men and women from that war I lived with and them forever. This bracelet is going to my Grandson and 50 years from today Lt. Gilbert Mitchell will be remembered." 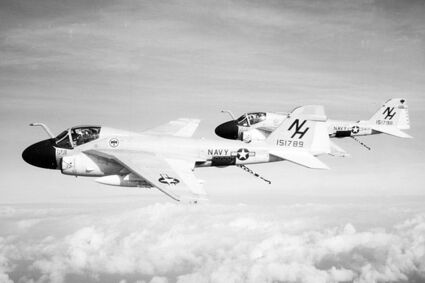 Let us pause for a moment and ourselves remember this extraordinary man, who sacrificed it all so that we could live free. Tehachapi's own Gilbert L. Mitchell, whose fate - like the fate of more than 1,500 U.S. servicemen whose remains are still missing in Southeast Asia - has yet to be fully accounted for - more than 53 years after his Navy aircraft vanished over North Vietnam in the early morning mists of March 6, 1968.