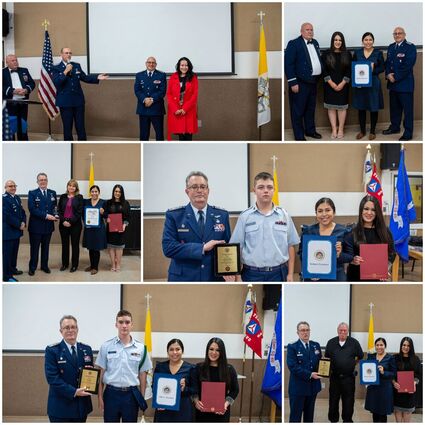 Cadets were awarded at the banquet.

In addition, every cadet and senior member that promoted or received a squadron award, including our guest of honor, received a special certificate from State Assemblyman Vince Fong's office for their achievements and valued service to our community. Squadron 46 was also presented with a special Certificate of Recognition from State Senator Shannon Grove's office for its emergency services work and cadet programs work in our community.

This was truly a great night to remember.

Special awards were presented to:

Mrs. Lara Steinke, who received a Squadron Appreciation Award for her assistance in rebuilding our squadron during and following the COVID-19 global pandemic shutdown. Thanks to Mrs. Steinke, the squadron experienced just over an 800 percent growth and acquired five new Aerospace Education Members (local teachers). Her hard work and commitment to the youth of the community has been greatly appreciated.

Squadron 46 Senior Member of the Year, Major Carl Gehricke, went above and beyond during the height of the pandemic and was able to help the squadron interact with the City of Tehachapi efficiently to assure that the needs of the cadets and our community were being met.

Squadron 46 Cadet Non-Commissioned Officer of the Year, C/SSgt Ryan Megrdle, trained and mentored new cadets as they joined our squadron. His hard work and dedication were evident for all to see at the end of year banquet. Nine of the 10 cadets who were promoted were a direct result of his mentoring and leadership.

Squadron 46 Cadet Volunteer of the Year, C/SSgt Jayden Kaczmarczyk, volunteered over 60 hours of his personal time performing community service. It should be noted that C/SSgt Kaczmarczyk had a full schedule attending school, completing homework, doing household chores and attending squadron meetings during this time. C/SSgt Kaczmarczyk exemplified the core value of volunteer service that is at the root of all that the Civil Air Patrol does for our communities and our nation.

Cadet Ribbon Awards were presented to:

Cadet Promotions were as follows:

Congratulations everyone on your promotions and awards. 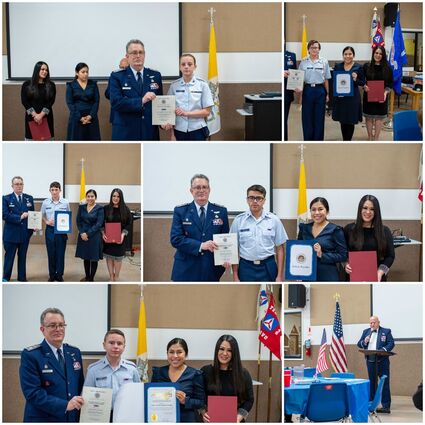 Cadets were awarded at the banquet.

The Tehachapi Composite Squadron 46 would also like to thank Father Mark Maxon of St. Malachy Catholic Church for allowing the squadron to have their event at McMullen Hall, the Knights of Columbus-Council 7821 for serving at the banquet, the Megrdle family for their generous donation and finally Tehachapi's very own American Legion Post 221.

Squadron 46 would also like to thank all the cadet parents and the great community of Tehachapi for their continued support. If you are interested in volunteering and helping the young men and women of our community, the squadron is looking for folks with media (press), IT, personnel, and administrative experience to assist it during this period of growth.