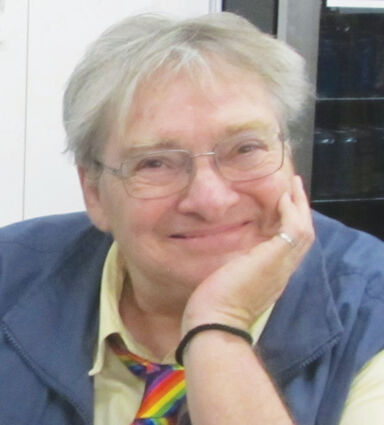 One of my favorite parts of the winter holiday season is driving around town after dark and seeing all the Christmas lights and decorations on people's homes and yards, including, of course, decorated Christmas trees seen through house windows.

Long ago my family used to always take part in this holiday tradition, usually starting to decorate our house the day after Thanksgiving, or sometimes not until the first weekend in December. Then around the middle of the month, especially if it was snowing during the day to really get us in the mood, we liked to take a drive to see the Christmas lights around town. Often on Christmas Eve we'd drive around delivering presents to special friends and maybe take the long way home to see even more Christmas lights.

In those days there wasn't a map of exceptionally decorated houses and yards – we just drove around and looked for reasons to turn down this street or that. Through the years, happily, lighting and decorating contests became a thing and maps were introduced to let the public know where the best houses were. And even better, the last Christmas that my dad was with us, we bought tickets and took a tour bus around Denver to not only see some fantastically beautiful Christmas scenes but also to make several part-of-the-package stops to talk to the owners/decorators and drink hot chocolate with them.

I don't decorate my own house much these days but I still love to drive around town and see what other people do. And this year has been pretty terrific right here in Tehachapi. In fact, perhaps because so many of us are so excited to be celebrating Christmas again, quite a few people started putting up lights and outdoor decorations really early this year. I came home after dark one evening before Thanksgiving and was surprised to see so many lights already up. I put a couple extra miles on my car that evening just exploring and enjoying.

All the lights make me happy and feel a little hopeful, and certainly they get me more in the Christmas spirit. Adding to that feeling, I went to see a movie at the Hitching Post on Dec. 4, and when it let out after dark I saw that the Tehachapi Christmas Parade was still going by on F Street. I strolled on over and watched all the lit up vehicles go by, enjoying being surrounded by people who were also enjoying the spectacle and feeling a real sense of community.

(Later, driving home by Central Park, I saw blinking Christmas lights in the distance that seemed to be up in the air in the middle of the street. As I got closer I realized they were Christmas lights on cowboys and cowgirls, finished with their part in the parade, who were riding up the street on their horses ... horses who, by the way, were also adorned with lights and tinsel. What fun!)

The happy tradition of Christmas lights actually started with candles in Germany in the 16th century, in order to illuminate all the pretty things on the Christmas tree (putting pretty things on evergreen trees was actually an ancient pagan tradition, adopted some centuries later by the Christians). Adding light to Christmas celebrations grew through the years and then really took off in 1882 when Edward Johnson, a friend of Thomas Edison, lit his Christmas tree with red, white, and blue electric lights.

By 1890 strings of colorful lights were being mass produced in America, and you can drive around any night and see how that invention has blossomed into the spectacular visions we can see this year. You can even get a map of the Christmas decorating winners in Tehachapi and enjoy a feast for your eyes right here in town (rivaling anything I ever saw in Denver).

I hope you will drive around after dark between now and Christmas, and I hope seeing all the lights and decorations in your neighbors' yards will bring a smile to your face like they do to mine, and that those lights and smiles will put you in a holiday spirit of joy and peace and love. I also hope you let your own spirit-of-Christmas lights shine, metaphorically speaking, throughout the coming year.

© 2021 Marilda Mel White. Local writer/photographer and sole owner-for-one-more-month of Tehachapi Treasure Trove, Mel has been looking on the bright side for various publications since 1996 and welcomes your comments at morningland@msn.com