Lighting the menorah: a Chanukah tradition 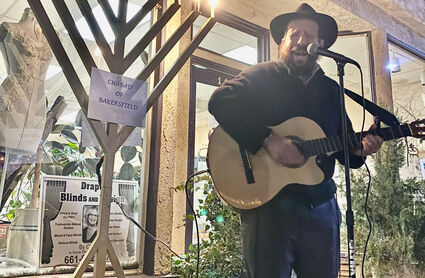 On Nov. 29, the second day of Chanukah, Tehachapi's Jewish community and friends met in front of Moses Master Carpet on Tehachapi Blvd. for faith, fun, fellowship, and food. Rabbi Shmuli Schlanger journeyed up from Bakersfield to preside over the ceremony of lighting the menorah, singing traditional Hebrew songs and sharing his message of faith.

The Rabbi prefaced his presentation by saying, "Chanukah is a very important holiday, not just for the Jewish faith, but for faith." He told the story of the oppression of the Jewish people under the Syrian Greeks during the second century BC. He explained that the Greeks had no quarrel with the Jewish people, but with their spirituality. They looked with contempt and suspicion upon the "unreasoning" and illogical rituals and practices the Jewish people employed such as "dedicating one full day of rest to the Shabbat, or like eating kosher food. Any of those unreasoning commandments." The Syrian Greeks forbade the spiritual rituals and customs of the Jews.

Far from desiring to destroy the Jewish temple (for the Greeks greatly admired the beauty of the building), they sought to stamp out the spirituality associated with the temple. To do this, they defiled the holy and sacred articles used in temple worship, including smashing the bottles of pure olive oil that had been sealed by the high priest. Their aim was to root out the spiritual significance from lighting the menorah.

But a little boy who was helping to clean up the temple discovered one small bottle of pure, undefiled olive oil, which was used to light the menorah. When a group of Jews travelled three days to an olive grove, spent two days making more sacred oil and another three days on the return trip - eight days altogether - they were overjoyed to discover that the meager oil that lit the menorah had lasted all eight days. "This," said the Rabbi, "was the miracle beyond what their eyes could see. It was a miracle beyond nature. ... Chanukah is celebrated with the miracle of the oil to remind us that it is spirituality, it is the rituals that were given to us, not because they made sense, or because we're comfortable doing them, or because it's nice to sit around with our families doing these rituals, but that they were commanded to us by God. ... We only wish that the day will come soon that we will indeed have the menorah lit again in the Holy Temple in Jerusalem, speedily in our days."

Then Rabbi Schlanger entreated a man named Roger to light the giant, electric menorah by twisting the first two bulbs in correlation to the second day of Chanukah. After that, the party was on: the Rabbi sang several songs including some Psalms in the Hebrew language written by King David, the Dreidel Song and even one verse of Adam Sandler's comic Hanukkah Song. The latkes were lovely, the donuts delicious and the spirit of shared faith and camaraderie was uplifting. As Rabbi Schlanger said, just before packing up to return to Bakersfield, "We aim to change the 'Oy!' In Jewish life to 'Joy!'"