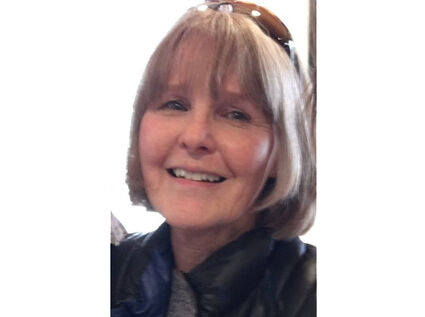 "When we do the best we can, we never know what miracle is wrought in our life or the life of another." –Helen Keller

"Delightful" is what came to mind when I first met Joan Cote. She exuded a sense of serenity and joy that permeated the air around us. I knew my intuition was right, after I called the person who recommended that I interview Joan. That person said, "I knew you would love her. She is the cutest thing on this earth. She is just full of joy and exuberance." "Delightful" is not a word I'd use to flatter. Rather, it is a sincere acknowledgement of Joan's complete honesty and authentic self-presentation. That's what I found so special about Joan. She is real. I knew instantly that this was a woman who, just by being herself, puts the people around her at ease, like a comforting old friend who makes you feel at home.

"When the mind is pure, joy follows like a shadow that never leaves." –Buddha

a woman with grace, gratitude and joy

Joan Cote was born in Trona, California, a little town off Highway 395, near Bishop. She laughingly says people either know it or they don't.

Her father had worked there in the mines before he started driving for Mother's Cookies, delivering to grocery stores in the area. They used to come to Tehachapi and deliver to the Candy Mart. When the Candy Mart went up for sale, Joan's dad bought the store and moved the family to Tehachapi, which is where she and her siblings grew up. At the time, the grocery store was in the front with a one bedroom, one bath house in the back. When they moved in, there were four children in one bedroom, and the family had another child on the way. After the earthquake in 1952, the chimney fell down. All of Joan's uncles got together with her dad and used this event as an opportunity to remodel. They removed the chimney and added more rooms around the central part of the house. By that time there were eight in their family, Joan relates, but now they had another bathroom and extra bedrooms. Family has always been important to Joan. She is still close with all of her siblings. Interestingly enough, the house they grew up in is now the Tehachapi SENIOR CENTER.

When she graduated from high school in 1966, Joan thought she was ugly, fat and unworthy. Because she didn't have much encouragement growing up, Joan was shy and hadn't a lot of confidence in herself. Still, she moved to Bakersfield and started taking classes at the community business college just for personal enjoyment. She thought she might like being a secretary, but didn't think she was smart enough to get an AA. Then one day she realized that she was only six credits from an associate degree. After receiving her diploma from the college, she went on to get her BS from the University of San Francisco. She worked as an administrative assistant in HR, and as a recruiter, before she met her husband, Ed. Together they moved to Hanford in Washington state where Ed worked as a physicist.

Over the years, she has had the opportunity to live in many parts of the western United States. She lived in the Bay Area for about 25 years before moving on to Santa Barbara, Washington state and Phoenix, Arizona. She said that Phoenix was the one place that she really didn't enjoy. The desert has never agreed with Joan. Her mother once told Joan that when they lived in the desert Joan was always grumpy, but in Tehachapi she was joyful and happy. Even though she didn't love Phoenix, she dug in her heels and made the best of it. She went back to school and became a paralegal. Shortly thereafter, her marriage ended. Looking back, Joan says the marriage wasn't all that bad. They traveled a lot, enjoyed the same interests, and visited many of the United States. Joan says her bucket list is to see all of the states. She and Ed had a timeshare which provided them the opportunity to see lots of interesting places. Even though the marriage ended, they remained friends for many years. Joan chose not to marry again.

After Phoenix, Joan moved to San Diego where she was a compliance officer for an aerospace company for ten years. When she retired, she knew that she wanted to return to Tehachapi. She had four brothers in the area (two have since passed away) and a sister in Lake Havasu. Having been raised in Tehachapi, she also had many friends here. It felt like coming home. She has always loved the weather in Tehachapi, the mountains, the greenery and the people. She has been here six years now. One thing Joan loves is art. Watercolor is her favorite medium and she enjoys drawing as well. She also finds pleasure in bird watching, hiking and line dancing. Joan will never be bored. She has been an active member of the American Association of University Women (AAUW) for many years and is currently the president of the local Tehachapi chapter.

Joan's advice to others is simply to have fun. "Sometimes we take life too seriously and we think too much about things," says Joan. "You have to be happy even when it's hard. There is an intelligence out there and it is important to listen to your higher power. Your intuition will lead the way. But mostly you just have to chill." I agree with Joan. Especially now with all that is happening in our world, it is so important to be good to ourselves. Believe it or not, staying positive and joyful is also the best gift you can give to those around you. Thank you, Joan Cote, for the joy you share!

Creative expression is often a means of bringing peace, calmness and new perspectives to an otherwise difficult day. When we get in the zone by making art, our worries tend to dissipate for a season. When we come back to them, they may still be there but we now look upon them differently. Why? Creating art is a time-out which allows us to experience some joyful time with ourselves. It's kind of like taking us back to childhood, when we could color peacefully, without the monkey mind intruding.

1. During this process, bring to mind your own joy. Does it feel contagious to spend time looking at smiles? Do you feel elevated looking at things that make you smile?

2. Cut out pictures of smiles and/or things that make you happy and create a collage. The goal here is to reflect on the things that are inherently part of what makes you, you. Reflect on what truly makes you content and brings you joy. Let this project serve as a reminder and something to spark joy when you need it most.

The Wisdom Keepers, Tehachapi Women of Substance and a Few Good Men is a book in progress by Judith Campanaro, Tehachapi artist and resident. Judith's love of sharing inspirational stories of others prompted her to highlight amazing locals that make Tehachapi special. Each edition of The Loop newspaper will feature an excerpt from the book to give you a taste of our fabulous residents. The complete book will be published in late December/early January. If you would like a copy, please contact Judith at judithcampanaro@gmail.com. In the meantime if you'd like to recommend a local person for an interview send their name and number to Judith at judithcampanaro@gmail.com or (646) 896-4434. She will contact them.