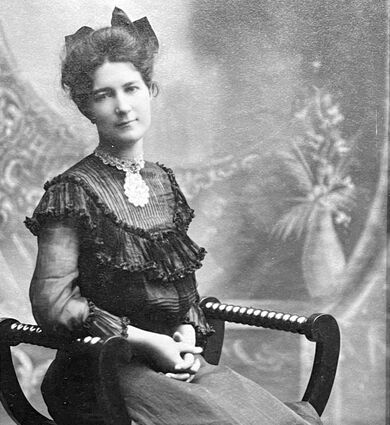 There hangs on my wall, among an assortment of family photos, a photo of a fine looking lady. Her dress style would put her somewhere between the turn of the nineteenth and the twentieth century; that is to say, in or near about 1890 or 1900. I have no idea who she might be, but she has been a guest on my family tree photo wall for "nigh on" forty-five years.

My eldest son drove in from Bakersfield one day in 1976. He had driven down to Edison Highway to check out some of the junk shops that used to line the highway. He'd been looking for some special part or article and hoped to find it. Instead, he came in with the photo of a woman in early century dress. She was a well-dressed lady in probably her mid-forties. I think she knew the photographer as her smile looks genuine.

As my son showed me the photo he had found among many objects in the junk shop he said, "Mom, I just couldn't leave her there. Could you give her a space in your photos?" So for forty-five years, this fine looking lady in her stunning turn of the century gown has shared a branch on our family tree. The photo was professionally framed and the little tacks used in that period have all rusted. I carefully loosened them and slipped the backing off to see if perhaps a name might be on the photo but, alas, nothing.

I consulted a photographer who looked at it and told me, practically, the history of the picture. It would seem that it was taken in a studio by a studio camera. The soft lighting enabled the features of her face to be clearly seen. The lighting was probably indoor but possibly some outdoor, also. It has depth of field, which means an unusually short lens. It is a contact print, which means it was not enlarged or made smaller. All of that is known by just looking at the photo.

My imagination ran away with me and I thought perhaps it was an early picture of Governor Downey's wife. She was killed in a train accident right here in the Tehachapi area. She had been afraid to ride the train and the governor assured her it would be safe. There is an exhibit about her in our local museum that gives the whole story.

Then I imagined it could be a photo of General Beale's wife or perhaps that of Chief Justice Earl Warren's mother. He had started in Bakersfield and was also Governor of California. Who knows? Imagination can take one many places. One thing's for sure; I never found out who she was. Another certainty is that she looked perfectly calm and relaxed for the photographer. Nothing like some of the stony faced photos one often finds in that period of photography.

Perhaps, if forty-five years ago I had put her picture in the paper, I might have had someone call and say, "Hey! That's my Great Aunt Hattie." No, she doesn't look like a Hattie. Perhaps, Salina or Catherine. It's too late, anyway. She's part of our family now.